If you are looking for a new display for your gaming setup, you may be considering curved vs flat monitors for gaming. Both types can be included in lists of the top-rated computer monitors, but which one is better for gaming? Keep reading to find out.

Differences Between Curved and Flat Monitors

The main difference between a curved gaming monitor and a flat monitor is the overall shape. Curved monitors feature ample curvature, while flat monitors are, well, flat. This difference in shape spirals out into other considerations, like when you are comparing a DCSI P3 vs sRGB.

You can mimic a curved monitor by opting for a three-monitor setup angled to resemble curvature.

The primary reason gamers buy curved monitors vs flat is for increased immersion. There is just something magical that happens when you sit directly in front of curved screens. The curves help to bring you into the game. This is helped by the fact that curved monitors are the perfect choice for an ultrawide aspect ratio of 21:9, like the monitor PewDiePie uses, whereas flat monitors excel with a standard aspect ratio of 16:9. The difference in the immersive experience here can be stark, though not as severe as a CRT vs LCD gaming monitor, which, unfortunately, are not the best monitors for flight simulators.

The arced design of curved monitors helps to minimize eye strain, according to several studies. A curved display, after all, mimics the human field of view, a feat that flat monitors simply cannot pull off. Some gamers report that playing their favorite video games with a curved monitor leads to actually forgetting they are staring at a screen in the first place, adding to the immersive experience.

Not all games are designed with curved monitors or ultrawide aspect ratios in mind, whereas all games should function normally with a flat display. If you are struggling to figure out whether or not your favorite game will run smoothly with a 21:9 aspect ratio, check on the specification requirements. They should be listed on the Steam page or on the game’s box.

Flat monitors have been the standard for decades, so they tend to be much cheaper than a curved display. Of course, there are always deals to be had, even when it comes to the best ultrawide gaming monitors.

Do gaming monitors deliver good sound or do I need external speakers?

Some do. It depends on what kind of speakers, if any, are included with the display.

What does the R-value mean in the context of curved monitors?

This refers to the curvature radius if it were to continue on to deliver a full circle. The higher the R-value, the more extreme the curvature. Curved screens vary wildly when it comes to R-values, with some ultrawide monitors delivering a wider field of vision than others.

Are curved monitors worth the extra cost?

Curved screens may be worth the extra cost, but this depends on what you are looking for. Ultrawide displays offer increased immersion when used as a monitor for gaming, but a similar refresh rate and similar response times to flat-screen monitors. 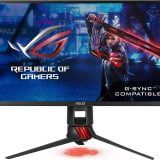 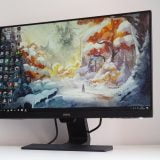 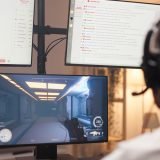 What Monitor Does Shroud Use 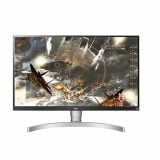 Gaming Monitor vs TV: Which is Best? 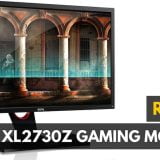 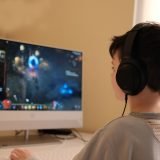 What is the Best Aspect Ratio for Gaming?