You have a library full of audio CDs, DVDs and Blu-ray discs. You want to dive right into 4K with the best blu ray player, but you aren’t ready to replace everything. With the Pioneer UDP-LX500, you don’t have to! It’s a universal disc player. Instead of overhauling your library, just use the best 4K blu ray player for your visual and audio needs. 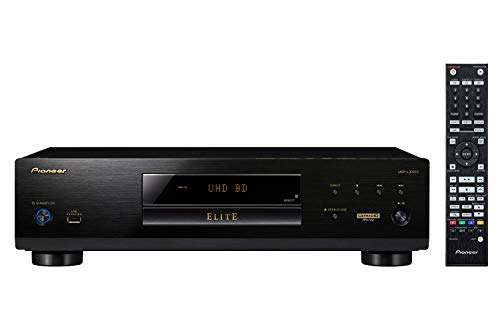 This UHD Blu Ray playback device doesn’t pull any punches in terms of video output and sound quality. It’s what 4K enthusiasts look for if you want the most out of your 4K TV. For a player with different features like 3D compatibility and WiFi connectivity, read the Pioneer bdp 150 blu ray 3d player review.

In terms of performance, the Pioneer UDP LX500 offers some of the best audio video quality we’ve ever seen in high end ultra HD Blu Ray players. It’s one thing to support HDR10, and a whole new level to support HDR10+, and Dolby Vision—a feature the LG UBK80 lacks. You can really see the vibrancy when viewing a film like Color Out of Space. Additionally, inferior formats like regular Blu-ray and DVDs get a boost to their lower quality signal, along with DVD Audio support, and will also switch SDR HDR quality based on the output you’re using.

The Pioneer Elite UDP-LX500 is built like a tank (figuratively speaking). It has to be; it’s packing so much inside that it needs plenty of protection. For starters, it has a three-block internal layout, which uses an ultra rigid construction and double-layered chassis. The main circuit board itself consists of six layers, which accommodates the outputs in the back. You have analogue audio output, AV receiver, optical digital audio, dual HDMI outputs, which also take advantage of jitterless sound and signal transmission, along with a zero signal terminal. These features remind me of the Sony bdp s580 blu ray disc player review, that describes a player with IP noise reduction to enhance the quality of the video experience.

The Pioneer UDP-LX500 has so much to offer in terms of features, in addition to its superior audio and visual quality Where it stumbles is the lack of smart features, unlike the Panasonic DP-UB820 Ultra HD 4K Blu-ray Player. There’s next to none. It’s a strange choice, but one we can look past largely because it’s so accommodating to any visual and audio library. You won’t have to worry about updating it at all. By the end of our blu ray player review, we realized it wants to be your one-stop home cinema device, and it’s making one strong argument. It’s pricey though; a cheap alternative would be the Sony Ultra HD 4K Blu-ray Player.

The Pioneer UDP-LX500 reveals all the cards in its hands, letting you know what it’s up to. Incredible video and audio quality are a hallmark of its features, in addition to HDR10, HDR10+, and Dolby Vision support. While smart features are missing, it makes up for it by being accommodating to your visual and audio library, as outdated it might be. DVDs and audio CDs are welcomed.