The best shower speakers turn your drab shower into a disco hall, replacing the sound of running water with your favorite tracks. Our evaluation focused on sound output, charge to run-time ratio, mounting options, power, and design. We also explored auxiliary features such as removable suction cups.

WHY WE LIKE IT: This Bluetooth shower speaker delivers up to 10 hours playing time on a 3-hour charge and a suction cup for easy mounting.

We love this shower speaker’s 5 watts of power, which delivers loud and clear audio. It can also double as a speakerphone for hands-free calls, preventing you from having to scramble across wet bathroom floors to answer. Bonus points for its detachable suction cup, which can be attached to any smooth surface.

This shower speaker’s Bluetooth connection can be paired with a phone or smart speakers up to 33 feet away. This makes it possible to pair your shower speaker to a laptop or keep your device outside of the bathroom. Bonus points for fast pairing – our tests completed pairing in 6 seconds. If you like your music and have mobility issues, the best shower chair is a great addition to this.

WHY WE LIKE IT: This wireless shower speaker comes with an information-packed LED display and a plastic base. It is a great choice for anyone who would like to keep track of the time in the shower.

Thanks to this shower speaker’s LED display, you can be treated to a synchronized light show that pulses to your music, turning your shower into a disco hall. It also shows you the time and remaining battery life. 360° surround hits high and low notes well, even at high volumes. It also offers 8 hours of playing time on a 2-hour charge, so it doesn’t test our patience levels.

This shower speaker’s plastic bottom and removable suction up allow it to float in water upright or suctioned against a shower wall. Plus, with an IPX7 rating, it can be submerged in as deep as 1 meter of water for 30 minutes without breaking, just in case you want to take this into the bath tub. Another one of the best Bluetooth speakers is the BOOM Swimmer DUO, which is a waterproof speaker with stereo linking as well for a more robust sound quality. It also features a suction cup attachment and loop tie for hanging as well. It may also be time to replace your current curtain liner with the best shower curtain liner.

WHY WE LIKE IT: This Bluetooth speaker comes with a whopping 20 hours of battery life and 30 watts of power.. It is the ultimate beach and pool party speaker.

Our favorite feature on this shower speaker is its power. At 30 watts, it is loud enough to boom over Olympic sized pools. 2 bass radiators on opposite ends really amplify sound well and add to the fun. It also allows hands-free calls, with the ability to accept or decline calls without touching your phone.

We appreciate this shower speaker’s durable construction. Like theBassPal IPX7 Waterproof Portable Wireless Shower Speaker, it is IPX-7-rated. Bonus points for its massive 7,800 mAh battery, which delivers 20-hour battery life on a 4-hour charge. Another option for a portable Bluetooth shower speaker is the LEZII IPX7 Shower Bluetooth Speaker, which can be set up in the shower, by the pool, on a bike, etc. It also has an FM radio feature with 82 radio stations. The best tankless water heater is another great addition to the bathroom.

WHY WE LIKE IT: This shower speaker delivers the best 360° sound and an “Outdoor Boost” setting that increases volume. Match that with a 13 hr battery life and it’s rugged build and it’s a winner in our book.

We love this shower speaker’s controls. Two large volume control buttons display a ‘+’ and “-,” top buttons for power and playback and a bottom button for Outdoor Boost. While testing, Outdoor Boost really amplified vocals, with a more noticeable treble effect. We noticed no audio distortion, even at high volumes.

It is also durable with a top and bottom rubber surface, with an IPX7 rating to float poolside and withstand heavy currents without breaking. Kudos to its 13-hour battery life on a 3-hour charge, second only to our #3 pick, the JBL Charge 4 Waterproof Wireless Shower Speaker. We enjoy shower speakers with long running times. With long running times, you may shower longer, so make sure that you have the best shower curtain.

WHY WE LIKE IT: This flashy shower speaker comes with a detachable suction cup and hook. It’s equally useful in the shower or listening with a backpack in tow, making it great for other activities

This shower speaker has impressive Bluetooth capability, pairing with any devices up to 33 feet away. A built-in microphone also allows hands-free calling. This is a lifesaver for people who take long showers twice a day.

We like this shower speaker’s sturdy construction with rubber casing, aluminum alloy metal hook, and an extra-large suction cup, which can be attached to any smooth surface. Though it is sturdy, it is not iPX7-rated, meaning it cannot be submerged in water. However, the occasional water splash should not be an issue. You can park it on the best shower caddy to keep it safe.

WHY WE LIKE IT: This shower speaker comes with the best Bluetooth range on our list (66 feet) and at the best price. It can be submerged in up to 1 meter of water and has a great battery to boot.

Thanks to this shower speaker’s 5 watts of power, it delivers crisp, loud sound, more than enough to hear well while showering. A built-in mic also allows for hands-free calling. Charge times are very respectable, playing up to 12 hours on a 3-hour charge.

This shower speaker uses Bluetooth 5.0, which provides an incredible range, pairing with devices up to 66 feet away. A better wireless range makes it easy to use at pool parties, where party-goers can pass it around a large pool without losing playback. We also like its I-PX7 rating, good enough for it to be submerged 1 meter underwater for 30 minutes without breaking. Another excellent waterproof Bluetooth speaker on Amazon.com is the SoundBot SB510 HD Water Resistant Bluetooth 3.0 Shower Speaker, which features advanced digital sound quality and a detachable suction cup suited for indoor and outdoor surfaces.

Our recommended picks usually carry a combination of a removable suction cup for smooth surfaces, hook (to hang on backpacks), or plastic casing to float easily in pools without getting submerged completely. Functional design elements incorporate impact-resistant rubber casing to protect against accidental drops.

Power is very important. Most of our picks top out in the 5-watt range, which is more than enough power to hear shower speakers over running water no with no issues. Our most powerful pick, the JBL Charge 4, owns an impressive 30 watts using a 7,800 mAh battery, head over heels above all others on the list. Run to charge time ratio should also be considered. Generally, we like charge times to be no longer than a quarter of the shower speaker’s max playing time. We feel this meets most people’s patience levels.

Can waterproof speakers go in the shower?

Yes, they can. Look for shower speakers with an I-PX7 rating, which means it can be submerged in meter-deep water for 30 minutes without getting damaged. Don’t forget powerful suction cups to keep it in place against any flat surface.

Yes, they are, with the correct IP rating. We recommend shower speakers with an I-PX7, which we feel offers enough resistance to withstand splashes and occasional submersion in a water-filled tub. Please confirm the device’s IP rating before using.

What is the best waterproof shower speaker?

In our opinion, the best waterproof shower speakers have an I-PX7 rating, at least 33 feet of Bluetooth range, powerful suction cups for easy mounting on flat surfaces, and at least 5 watts of sound, which is more than enough to hear over running water. Extra points if it uses a waterproof base for it to float in tubs or pools. 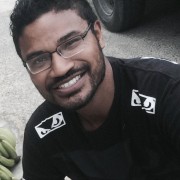 Diehard UFC/MMA fan and all-around techie who loves to write.

Unwire Your iPod With The Audioengine AW2
February 7, 2020