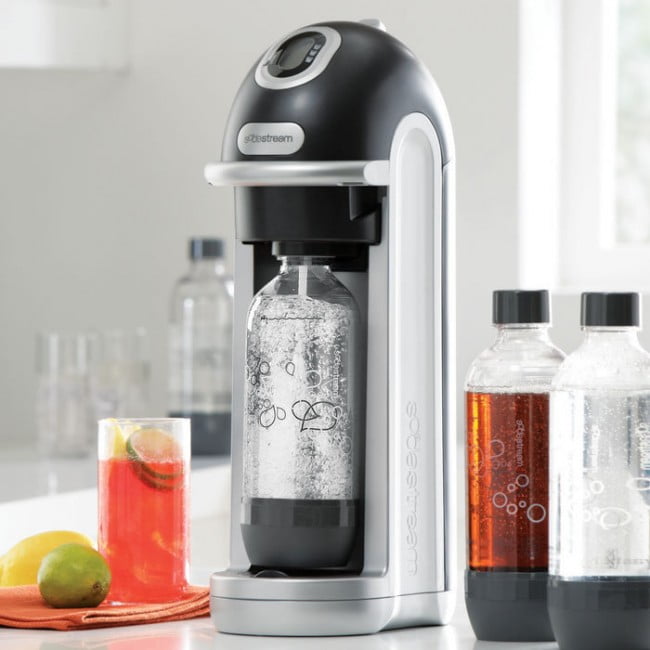 I have already done a number of different reviews on do it yourself beer kits and do it yourself wine kits – so why not a do it yourself soda kit?  That was the question I asked myself when I first saw the Soda Stream Fizz at the local Bed, Bath, and Beyond store.  While I and my wife may enjoy the beer and wine, our kids have said they felt left out before because they weren’t able to try anything we made, or make anything themselves.  While it might not be anywhere near as complicated of a process (the best kitchen gadgets make things a lot easier), I thought that making our own sodas would be at the very least a fun and engaging family project.  I hear a lot of people talking about Soda Stream products when we go to the store, so there has to be something to it – right?

Turns out that there definitely is.  When the box arrived on my doorstep, everyone took interest when I pulled out what was sent, which was a big deal in and of itself.  You see the kids don’t usually care what I get in for review (see our Sodastream Revolution review), but they were positively electric when they saw the Soda Stream logo.  Unpacking the box I found a ton of drink mixes, a CO2 canister, and the Soda Stream Fizz itself – enough to keep us going for quite some time.  Set up was incredibly simple – just screw the CO2 canister in to the Fizz unit, and you’re pretty much ready to go. 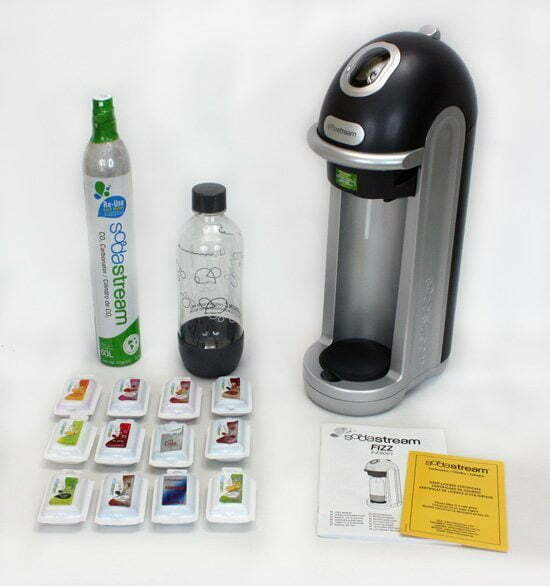 Using the included bottle, you fill it up to the line with cold water then just screw the bottle into the Fizz unit, and push the lever on the front to shoot the CO2 into the water.  After depressing it for about one second you’ll hear a buzz (pressure build up being released) and you let go for a second, then repeat the process two more times.  That gives you a “regular” amount of carbonation – you can stop at two presses for a bit less than normal, or do more than three if you want a super carbonated beverage (which is GREAT fun if you want to surprise someone).  After that you pour a cap full of the flavor you want into the bottle in order to make your soda.  Simple set up, simple operation (and you can have a simple and effective cleanup with the Lysol Multi Surface Cleaner Sunflower 3x40oz); but none of that will matter much if the soda that comes out tastes like toilet water, right?

Thankfully there is no worry of that here, with the drinks we were putting out tasting as good as, if not better, than most commercially available sodas.  The root beer was far and away one of the best root beers that I had ever had, and I like to drink different “microbrew” root beers as I find them to have a crisper taste than the big name brands.  The Dr. Pepper clone was the only flavor that I really didn’t care too much for, but there was one that wasn’t a clone that really blew my mind.  It is listed under Soda Stream’s “Sparkling Naturals” line, and it would be the Black Currant and Pear flavor.  I can’t even really describe it accurately, just know that it was absolutely phenomenal (and mixed really well with vodka for those over the legal age). 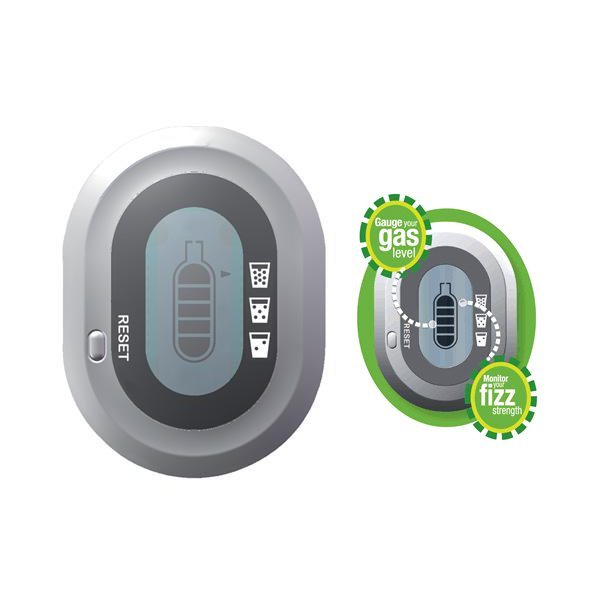 Now the Soda Stream Fizz is “different” from the other Soda Stream models as it has a “Fizz Chip” inside of it.  This chip actively monitors the amount of CO2 left in the tank and displays it on a little LCD screen so you know when you need to buy a new tank before it actually is empty.  It also monitors how much carbonation is in your bottle, so you can get it really perfect when you’re making your soda.  Yea, it’s really just a glorified pressure sensor but aesthetically it works, and doesn’t detract anything from the overall look of the system.

Now unfortunately the bottle (the Soda Stream Fizz only comes with one) is not dishwasher safe.  I found this out because my son, in an attempt to help clean up, put it through a normal wash cycle.  What came out was a melted lump of a bottle – so just buy another one, right?  Well there is one of my biggest issues with the Soda Stream – bottles cost $10 a piece (you can buy them in a 2 for $20 pack at WalMart).  Yes, I understand that they cost a lot because they are reusable, but to get enough to outfit my family would make me drop another $40 on top of the cost of the Soda Stream Fizz itself (if I were a normal consumer).  Top that with the cost of the refill packs, and it ends up just being cheaper to go and do things like you’re probably already used to.  It has nothing to do with the quality of the end product but everything to do with the cost associated with getting there.  I know there is probably a good number of people that this product would generally appeal to, who just won’t be able to keep up with the costs of owning it.  On the positive side though, it is extremely environmentally friendly. 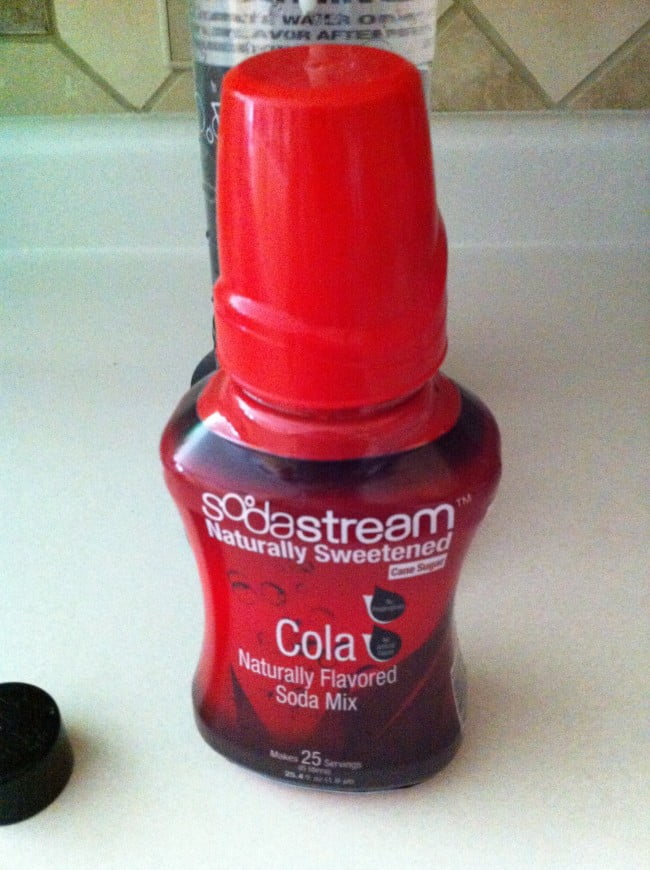 Another small issue I had was that on some of the sodas the carbonation didn’t seem to “stay” unless I severely over carbonated them.  On the sparkling juices that wasn’t an issue, however with them there was a different problem – namely that if I filled the bottle all the way to the line, put the carbonation it, and then put the juice mix in it would ultimately overflow.  I never had this issue with any of the soda mixes – only the juice.  Now all I had to do to remedy that was put less water in the bottle, but it was just the fact that things weren’t right.

Bottom Line:  The Soda Stream Fizz is a fun toy for those that can afford it, but the expenses can rack up pretty quickly.

You can grab a Soda Stream Fizz from retailers everywhere including Amazon for $129.99 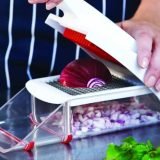 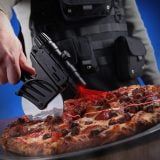 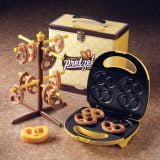 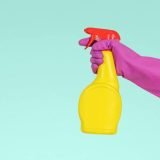 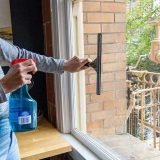