The design of the Victrola VTA-600B-ESP takes classic Bluetooth record players, combines modern technology, and creates a hybrid playback device. And with 8 ways to play music, Victrola’s motto should be “Why not?” That alone makes it one of the best record players turntables, with great sound quality to boot. 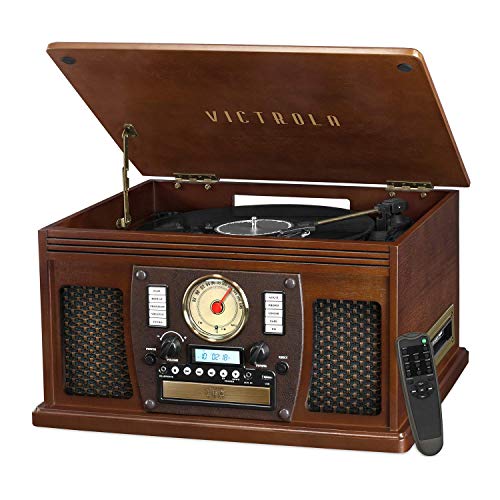 Underneath its throwback design is a record player that includes a CD cassette player, USB player, AM/FM radio, RCA, 3.5mm aux-in, Bluetooth, and even a headphone jack.

Nothing beats the sound of vinyl, and we’re glad the Victrola VTA-600B-ESP has the speakers to back up its high quality sound. Of course, that wasn’t the only way of playing music. You can switch to Bluetooth, CDs, cassettes, AM/FM radio, Aux, and even headphones. This music player combines modern technology with old, a decision we felt was its biggest strength.

Another great feature is its 3-speed turntable. It plays vinyl, yes, but also doubles as a recording device. With the help of the USB cable included, you can take CD player cassettes and old vinyl records, record them, and create MP3 files.

This wood record player does a well enough job recreating a nostalgic design perfect for anyone looking for a modern music player, without the modern look. On the right face is the insertion for cassette tapes. Along the front of the music player are various buttons that switch between the various playback devices. For vinyl, you place the disc in the top opening and make sure the tone arm is in place. If modern is what you’re after, the Audio-Technica AT-LP120XUSB-BK might be a better fit.

What was jarring, however, was the modern buttons for Play/Pause, Stop, Next Track, and so on. Otherwise, the wood finish is very clean and will fit nicely with an old home. The Crosley CR704D-PA disguised their playback buttons a little better.

There’s quite a bit of value packed into the Victrola Navigator. Not only is the sound quality really good, that quality stretches across all 8 of its playback options, from vinyl to headphones. And that’s what’s so great about it. If you don’t want to disturb people, wear headphones. Got the house all by yourself? Drop old vinyl records onto the record player and enjoy the superior sound through great stereo speakers. And it’s $120? You’re getting an excellent deal, far better than the Byron Statics Turntable Vintage Record Player.

We really liked the Victrola VTA-600B-ESP; it’s the exact kind of device a music lover needs, provided the design doesn’t turn you away. Its 8-in-1 design means you can make use of old records as well as modern technology such as Bluetooth. And with its 3-speed turntable, you can take tracks from said old records and turn them into MP3 files, easily!