One of the latest in the SE450 series, the Samsung SE450 isn’t going to bring high frame rights or astound with a near lifelike picture, but it will always get the job done. Forgoing modern features, the SE450 focuses on performance and durability, the two best aspects of this monitor. With a durable stand, VESA support, and a surprisingly high resolution, this monitor easily makes it into our list for Best Vertical Monitors and Best Computer Monitors. 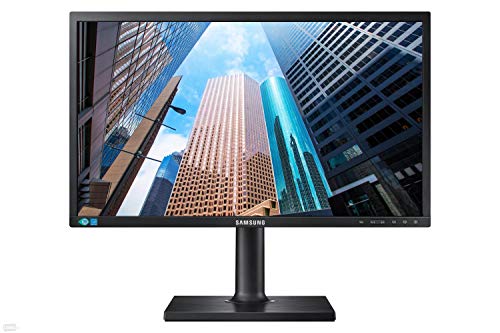 With Energy Star certification, you can be well assured that power consumption will never be a thing of concern. Offering a fair picture for the price, the Samsung Business SR650 shows a full HD picture, and some above average stats. For those in the market for just that, this may be the perfect fit. However, for those who are looking for a monitor with 4K resolution, you may need to look elsewhere, such as the BenQ PD2700Q.

The Samsung SE450 is a monitor that can withstand the rough and tough of an environment outside the typical office space. Some might use it for construction, while others may place it right next to their CNC mill. Either way the SE450 can take any situation and keep on going. The included stand is second to none, feeling more secure than most high end monitors, such as the Dell UltraSharp U2515H.

The Samsung SE450 comes equipped with simply DisplayPort, VGA, and HDMI ports. This no nonsense approach both helps and hinders the SE450, on one hand, this cements Samsung’s position keeping the SE450 as a work-centered monitor: not many use HDMI and USB ports for productivity. On the other hand, this alienates those who are looking for an all around monitor to use. Some simply aren’t willing to buy an HDMI adapter, and will simply look for another monitor with native support, such as the Samsung Business SR650.

What customers are missing in features the Samsung SE450 more than makes up for in durability. For $150 the SE450 is well worth the purchase, lasting customers a long time, continuing to provide a great picture without having to worry about the monitor ever being compromised.

A workhorse of a monitor, the Samsung SE450 focuses itself on durability and performance, able to take a hit and keep going, the SE450 was designed for work that’s not centered in the office. With VESA support, high resolution, and a reliable stand, no HDMI or USB ports only solidify that the Samsung SE450 is a monitor that’s built for work, not play.