If you aren’t too into the vinyl scene, and just need an average record player to play the few vinyl records you do have, ION offers one of the best record players turntables for the job: the ION Audio Air LP. It’s cheap, it plays 33 1/3, 45 and 78 RPM records, and even comes with a built-in USB output for vinyl-to-digital conversion. 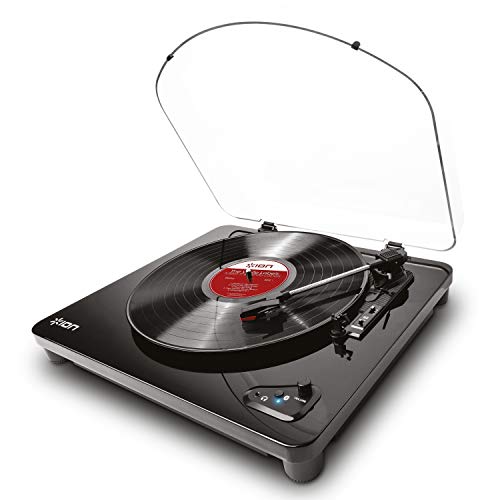 Why We Like It – ION Audio Air LP Review

A solid choice if you have a good Bluetooth speaker to pair, with the added benefit of converting a vinyl collection to digital through its USB output.

The ION Audio Air LP did not impress, unfortunately. The number one spot on our list, the Victrola VTA-600B-ESP, had no problem beating it in sound quality. The ION is average, at best. That did not stop it from being a decent niche device. For starters, it has good Bluetooth range of 10m. With Bluetooth speakers becoming a common household device, connecting the two is a cinch. If you have a few vinyl records lying around, and want to play them, you could give this one a shot. It has three speeds: 33 1/3, 45 and 78, so it’ll play the majority of records.

As for design, the ION Air LP Turntable feels cheap, a trait it does not share with the Crosley CR704D-PA. For $62, we expected sacrifices to be made with the chassis itself. It comes with a dust cover on a hinge, which we’re glad that wasn’t cut. It can also double as a place to set a Bluetooth speaker temporarily. We recommend you place it near a dedicated stereo system instead of Bluetooth; the RCA output in the back allows for that. You’ll end up with a much better speaker system. Additionally, you can convert your vinyl records to digital via the USB port. All you need is a USB cable.

Gauging the value behind the ION Audio Air LP was tough. It’s in a weird place where it wouldn’t satisfy audiophiles, nor is it the greatest options for newcomers to record players. Even worse, it doesn’t include the stylus to play 78 RPM records, which it supports out of the box. But it does offer a really cheap way to convert your vinyl records to digital, provided you have no need for record players.

If you want the best of both words—audio quality and converting—you’ll want the Audio-Technica AT-LP120XUSB-BK for that very reason. For budget, the Victrola VTA-600B-ESP has really good built-in speakers.

For what it’s worth, the ION Audio Air LP did its job. It played nicely with Bluetooth speakers and produced sound good enough to enjoy a few vinyl records, provided you grab the 78 RPM stylus. And when we wanted to take vinyls on the road, converting to digital was a cinch with its converter software.