Inside the Acer Swift 3 Gaming Laptop, you’ll find hardware that’s more than capable of being the best laptops for Minecraft. One piece in particular, the AMD processor, also makes it a candidate as the best gaming laptop for school, due to its multitasking potential. For tight budgets, gaming, and school work, we couldn’t think of a better option. 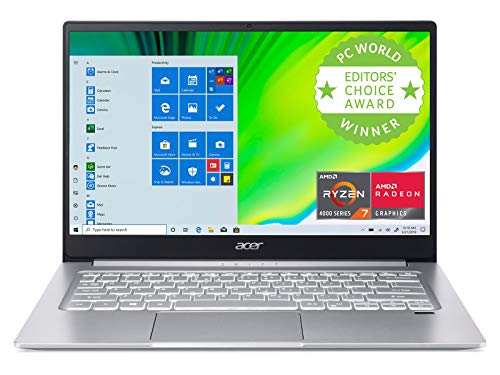 For budget gaming, playing Minecraft on the Acer Swift 3 Gaming Laptop is a cinch, thanks to a beefy 8-core AMD processor and integrated AMD Radeon Graphics.

To run Minecraft, the Acer Swift 3 Gaming Laptop uses integrated graphics, like Intel UHD graphics. Both the AMD Radeon Graphics and AMD Ryzen 7-4700U are comfortably above recommended system specs—especially the processor. On ultra-high, you’re expected to get well over 100+ frames per second, running at 60Hz. And given that the CPU has 8 cores—four more than the Intel Core i7 inside the Huawei MateBook X Pro Gaming Laptop—multitasking for school is easily handled, and slightly better in some areas than, say, an 8th Gen Intel Core i5. Battery life is rated for nearly 12 hours, a phenomenal amount for gaming and homework.

If there’s anything the Acer Swift 3 Gaming Laptop doesn’t do quite right is the build quality. It’s almost entirely made of plastic. Yes, it’s lightweight and thin, but there’s some bend that you or your child should be aware of. You wouldn’t want to accidentally destroy the IPS display. Along the sides are USB C port, HDMI, USB 3.2 Gen 1, audio jack, USB 2.0, but no Ethernet, so you’ll just be using Wi-Fi.

What should put the Acer Swift 3 Gaming Laptop at the forefront of your mind is this: it has some legs to stand on for gaming, but also doubles as a school laptop. It’s lightweight, thin, and powerful in its own right. The owner of this laptop will get a bit of each world, in one package, for just $680. That’s a great deal! But if they’d like to branch out, the Asus ROG Strix Scar III is a beast of a machine, though the Lenovo Legion Y530 offers a more budget-friendly option.

The Acer Swift 3 Gaming Laptop gets our seal of approval largely due to its excellent AMD Ryzen 7 processor. It not only works well with its AMD Radeon Graphics to ensure you have a smooth experience with Minecraft, but its 8-core design is a must-have for any doing school work. You need that multitasking potential, but also helps gaming.