What could possibly be the best laptop for students for its merciful pricing, the Acer Chromebook 315 offers great prices when purchased as a refurbished laptop. However, along with that low price is a laptop with fast performance and great customization options such as more disk storage space. 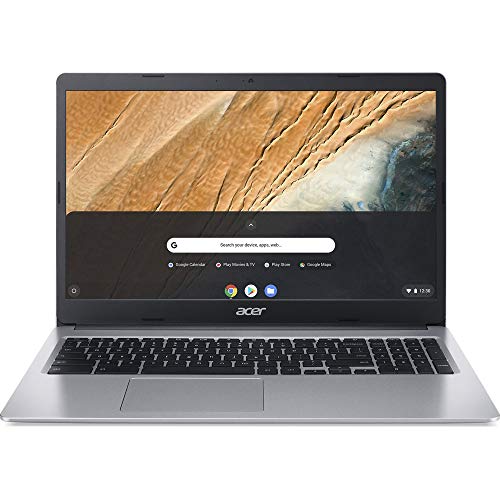 The Acer Chromebook 315 has access to features such as google play and the ability to offer gigabit wi fi speed. It also has two usb port types as well as the standard HDMI ports, allowing the user different ways to connect and charge their devices.

This laptop contains an intel core processor known as the Intel Celeron N4000, having a weaker processor than the Dell XPS 13 7390. Despite being a dual core processor, it’s powerful enough to make this Chromebook suitable for various tasks that range from laidback tasks such as light web browsing on the Google Chrome browser, to the more resource-consuming tasks like video streaming. There’s also an option to get a processor known as the Intel Celeron N4200 if you need something slightly more powerful.

The Acer has the battery life of about 12.5 hours, slightly surpassing the battery life of laptops such as the Dell G5 15 5590, which has a life of 12 hours. However, since it’s a refurbished laptop, it’s not always guaranteed that 100% of the provided battery is usable. Fortunately, at the very least, batteries that are provided with these refurbished laptops have no less than 80% of its full available power.

Unlike the Dell Latitude 7490, this assortment of ports only consists of an audio jack, usb type c/usb c ports, and usb 3.0 ports, providing up-to-date ports for fast file transfers and faster charging for various devices. Meanwhile, the Dell Latitude has USB 3.0 and usb types c, as well as USB 2.0, smart card reader, DisplayPort, and HDMI ports. However, both laptops have capabilities of gigabit wi fi speed as well as 802.11b/g/n wireless communication standards.

This slim laptop is able to be as slim as it is by containing a SSD instead of a traditional hard drive. Its slimness also ensures that any small components that end up loosening over time are unlikely to travel within the space between the chassis and motherboard, especially since it doesn’t have a built-in disk player. It also has an aluminum chassis for its basic layer of protection, providing some durability.

The lower pricing can mainly be attributed due to its low disk storage space and 4 GBs of RAM. However, its processor can also be a factor to determine the overall price, as it’s considered a lower-end processor by modern standards. However, the Acer Chromebook 315 is also available with more disk storage space, full hd, a more powerful Intel processor, and more if you have about a maximum of $95 to spare.

Customer reviews have been mostly positive, praising this laptop for being powerful enough to use for school-related activities. One reviewer has noticed how the laptop is suitable for Zoom calls, as their Zoom calls have crisp visuals without lag. However, keep in mind that the quality of refurbished laptops can be slightly inconsistent.

Bottom Line
Reader Rating0 Votes
0
What We Liked
What We Didn't
8.6
Expert Rating