What could possibly be the best curved monitor or the best widescreen monitor for how it processes visuals, the MSI Optix MPG341CQR monitor is an ultrawide gaming monitor that is optimized for streaming and modern games. It also contains an adaptive sync to enhance the gaming monitor both visually and through performance. 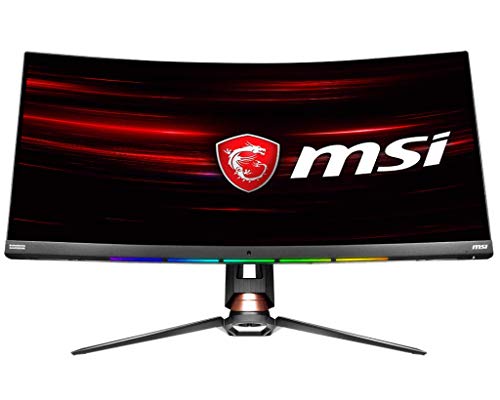 The MSI Optix MPG341CQR can be used for streaming with its high refresh rate and shorter response time, especially since it contains freesync technology to help avoid things like screen tearing. It can also provide night vision for when games can get too dark to the point of being difficult to see what’s on the screen.

This monitor has a va panel rather than a ips panel, as va panels can be used as a decent way to balance both image quality and gaming performance for people with smaller budgets in comparison. While the LED screen displays the optional motion blur feature, can utilize the gaming osd feature to customize how the user can split their windows when multi viewing, and has a 3000:1 contrast ratio, the physical aspects of the monitor ensure that monitor can be used for streaming in addition to playing games with higher graphical requirements.

Like other gaming monitors such as the Samsung C27HG70, these curved monitors are able to provide easier ways to provide viewing angles for the user to get immersed with what’s on the screen. However, what makes this monitor stand out compared to a lot of the other monitors is how the screen has non-glare properties. That coating can boost the chances of having more viewing angles that the user can use to avoid even more annoying glares.

It’s built in a way that not only shows how stable it is, but also gives the user peace of mind with how balanced it looks. By weighing a total of 29.76 Lbs., the weight has to be distributed in a way that keeps the monitor from tipping over without removing any of the physical features that the manufacturer wanted to implement into the product. More than 4 customer reviews have said that the stand is quite sturdy, with one review mentioning that it was made of metal to avoid potential bending.

This monitor has an impressive assortment of ports that the user can choose what to connect various devices to. It contains a DisplayPort, 2 HDMI ports, a USB type c, 3 USB type a, and a USB type b port. It also includes an audio jack and a mic in jack. Like the Philips Brilliance 499P9H, it provides a modern and versatile assortment for the user for various devices and video outputs, but unlike the Philips Brilliance 499P9H, it doesn’t have Ethernet ports.

While it’s cheaper than the Samsung CHG90 49-Inch Curved Ultrawide Monitor, it also has features such as rgb lighting to add pizzazz to the monitor in ways that can help contribute to how expensive it is. Aside from the physical “wow” factors, the underlying benefits of things such as the adaptive sync technology and 144 Hz refresh rate, are the more typical perks that modern gaming monitors tend to offer. However, there are alternatives with the same specifications without the rgb lighting if the user doesn’t care for those kinds of additions.

Customer reviews have mostly praised this monitor for its gaming performance. However, dark/ black smearing has been a complaint in more than just one MSI Optix MPG341CQR review. MSI may not be as well known as Dell or Samsung, but they may be able to develop a similar reputation with their monitors.