If you’re trying to expand your Nintendo Switch game library, we recommend this party game that is definitely a good time for any casual gamer looking for a video game to play with family and friends. This game is packed with many olympic-themed mini games, a story mode featuring a devious plot by Sonic’s arch nemesis, Dr Eggman, that combines characters from the classic crew of the mario and sonic saga, and it all takes place in the tokyo olympics. This is a video game for the casual gamers that enjoy slices of Nintendo life, but if you’re looking for a different style of games, consider super smash bros. ultimate or mario and rabbids kingdom from our list of the best nintendo switch games. 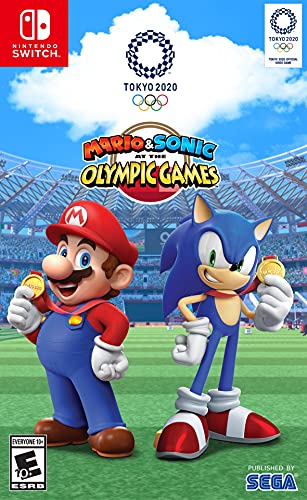 Mario & Sonic At The Olympic Games Tokyo 2020 has come a long way for Nintendo, now even for the Nintendo Switch, It’s become yet another great party game filled with a variety of olympic games to choose from. This time the Mario & Sonic saga includes both 3-D and 2-D style games, which gives a renewed sense of nostalgia from the 8 to 16-bit life.

Mario & Sonic at the Olympics Games Tokyo 2020 features new events such as olympic skateboarding, and sport climbing. It includes 3 new dream events such as dream shooting, karate, racing. Some events are centered on motion control that reminisce back to the Nintendo Wii days, but applies it to the Nintendo Switch. The controls for the games are all fairly easy to control making it an enjoyable game for players on all spectrums.

The Mario Sonic video game continues the classic Nintendo high contrast cartoon style it is worldly known for. With more than 40 mini games to choose from, it is worthy of entertaining players for hours on end. Even if you want to switch it up from the 3-D world it includes 10 mini games that are 2-D designed to give that retro feel from Nintendo technology of the past. It includes a multitude of characters to use in the mini games from both sagas, with each proper olympic costume design matching the event at play.”

This party game is guaranteed a good time with friends and family because of the various games that keep the competition fresh amongst one another. In addition, it includes a story mode that keeps you entertained on your own, and it features a clash between two classic protagonists of the gaming world, Mario and Sonic. Any newcomer can catch on quickly thanks to the easy controls of the games.

Mario & Sonic at the Olympic Games Tokyo 2020 Wrap Up

Mario and Sonic at the Olympic Games Tokyo 2020 is a must have for any growing Nintendo Switch game library. While it may have a short story mode, the various olympic events keep the game from going stale by having a wide selection to choose from. Having sports from soccer to skateboarding, and rock climbing, there is no telling how many hours you can occupy yourself gleefully by diving into this year’s version of the olympic games. If the world of olympic sports does not drive your interest, check out other games such as witcher 3 wild hunt for an adventure, or super smash bros. ultimate for a fighting spectacle.