If you’re familiar with the Yamaha YAS-107 that was announced in 2017, you might be interested to learn what it’s successor might have in store. If you’d rather be working with a speaker system instead of a soundbar, you might also want to read our Audioengine N22 desktop amplifier P4 passive bookshelf speaker review. The YAS-108 Yamaha bumps things up by adding Alexa Voice Control to its list of capabilities, but other than that, the two are pretty much the same. This being Yamaha YAS-108 review though, we’re going to focus on the newer model and see whether or not it is the best soundbar to buy on a budget in 2020. Or, if you need a speaker you can take on the go, take a look at our Tunebug Shake Portable Speaker review. 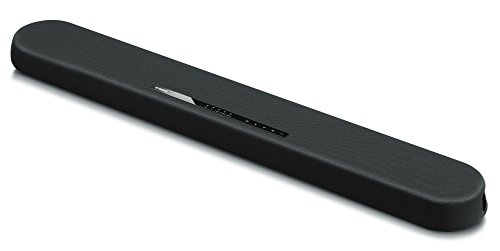 The sound quality delivered by the YAS-108 is nothing to wince at thanks to its 3-inch built-in subwoofers, two midrange cone woofers and two twitters. All these work together with features such as its Clear Voice dialogue enhancement technology to produce a good sound, whether you’re watching TV shows or listening to some music. Unlike the Sony HT-ST5000 that comes with its own subwoofer, the sound bar has a subwoofer output that allows you to add a separate subwoofer to the mix and amplify your sound. The speaker also includes its DTS Virtual X feature that adds surround sound characteristics such as height difference and the like, making it a perfect addition to your home theater system.

Design-wise, the YAS-108 looks sleeker than the Vizio SB3820-C6, but hasn’t changed much from its predecessor save for its more rounded edges. Input options are also diverse, as the YAS-108 Yamaha allows for Bluetooth wireless connectivity, HDMI, and Toslink Optical. Still on connectivity, the soundbar supports HDMI arc, which makes it possible to route your TV sound to it through a single HDMI cable. Owners also get to have two bluetooth connections at once, and this is great because it allows for you to use your phone to play music, and have it ready to respond to Amazon Alexa or Google Commands as well.

Despite being fairly low-priced and not as feature-filled as the Sonos Playbar, the YAS-108 still manages to punch above its class, and you’ll see that in the amount of value it is able to deliver. The soundbar’s remote control can be configured to also work as a TV remote if you enable the HDMI Cec feature on both sets, and can also activate its Virtual X setting by pressing the 3D Audio button. If using a remote still doesn’t sound compelling, then you can look forward to using the company’s Home Theatre Controller App so that you always have your remote at hand.

Yamaha YAS-108 is a great soundbar to go for without breaking the bank. The only reason that a wireless subwoofer wasn’t included was to keep the price down, and with the many things you can do via bluetooth, you won’t complain as much over its lack of WiFi.