The Ultimate Ears Hyper Boom takes your bass to a different level, as according to the company, it’s got six and a half times the bass that you get with the Megaboom 3. This is loud enough to rock a full house party, and with a 24 hour battery life, the portable speaker will make sure that everyone keeps dancing until the break of dawn. The big speaker is also water resistant to a certain degree, so it won’t let you down if you’re planning to host a pool party. Is it one of the best bluetooth speakers around? Find out by getting to the end of this UE Hyperboom review. 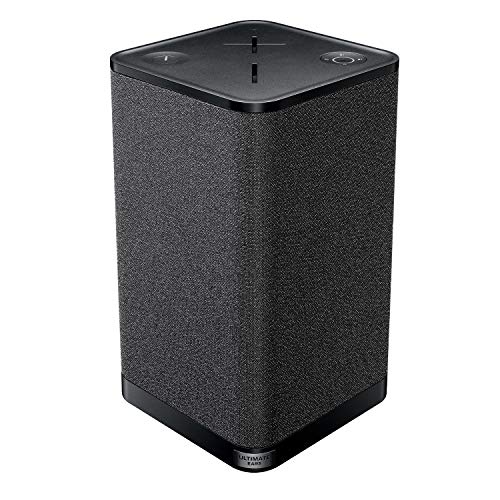 For those who aren’t comfortable with the large space that big party speakers are likely to take-up, the UE Hyperboom could be a worthy alternative to consider. It’s a portable bluetooth speaker that’s heavy on the bass, and with added features like adaptive eq, a 24-hour battery life and good water resistance, it blows a lot of its competition out of the water.

The UE Hyperboom portable bluetooth speaker comes packed with a couple of nifty features that help justify its hefty price tag, and the one that we found most intriguing is its Adaptive Equalizer (adaptive eq). The speaker relies on a built-in microphone to detect whenever its being moved, and is then able to customize the sound based on the room that it’s in to ensure premium sound quality – you won’t get this with the jbl charge 4 or the JBL Boombox. On top of that, you can have up to 4 music sources connected to it. These can either be two bluetooth connections, an AUX-in connection or an optical input that’s hooked up to your TV or PC. There’s no support for Wi Fi on this model, but with a bluetooth range of up to 45 meters, it’s unlikely that you’ll have any problems with connectivity.

At 13 pounds, the Ultimate Ears HyperBoom is a lot heavier than most bluetooth speakers, so this places a bit of a limit as to how far you can move around with it. Nonetheless, there is a retractable rubber handle that’ll help you carry it around. The Hyper Boom speaker towers above most of the other offerings that you’ll get from Ultimate Ears, so it’ll stand out pretty much anywhere you decide to place it. Like the oontz angle 3 bluetooth speaker, it’s only available in black, though it’s speaker grille does have a grey accent that may help accentuate things. The buttons on its top panel allow for one touch music control, and all the inputs are covered by a weather door to protect them from any water.

If the sound from one Ultimate Ears HyperBoom speaker is not enough, you can always link it up to two more portable speakers (from UE) to amplify the sound, and this can be done through the Boom app. From here, you should be able to control what music is playing, and also make changes to the equalizer to your own preference. In case your phone or mobile device runs out of power, you can hook it up to the speaker for a boost through its USB port. If this UE speaker doesn’t cut it for you because of its size, then a smaller & more portable option such as the bose soundlink color ii bluetooth speaker may be worth having a look at.

This Ultimate Ears bluetooth speaker has all you need to get a party going, and is guaranteed to last you a long time before you ever need to purchase another speaker. To be sure of what to expect from it, hop over to Amazon and read through the reviews that other buyers have left.