Best Printer for Chromebook in 2021 (May Reviews)_

Don’t let the Chromebook’s unique operating system alienate your printer. We purchased the best chromebooks printers compatible with, well, Chromebooks. After unpacking our printers, we started printing from our Chromebooks to test compatibility, color printing quality and print speed.

As we printed, we eliminated the ones that weren’t up to snuff and settled on the top 10 printers for Chromebooks in 2019, with the winner being the HP OfficeJet 200 Mobile. This printer made our #1 spot, not only for its performance, but also its extreme versatility and mobility options thanks to an onboard battery which keeps it chugging along even if there’s no power outlet to be seen.

But there’s plenty more models in the running for the top spot, so make sure to read on in our guide to the best printers for Chromebook to find out who made the cut! 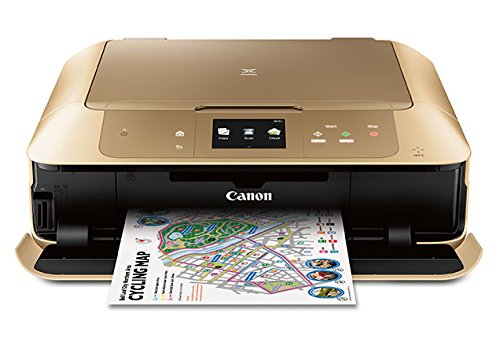 WHY WE LIKE IT: The HP MobileJet OfficeJet 200 lets you take your Chromebook printing on the go thanks to its onboard battery.

The HP OfficeJet 200 Mobile Printer is one of the latest to join the company’s oldest and most widely recognized brands in the world of printers, updated with a slew of new features that brings printing into the 21st century. Wireless printing has been around for a while now, but the HP OfficeJet 200 really lives up to its wireless/mobile name thanks to an onboard battery, which can be charged up so you don’t need to be near a plug in order to print out that emergency term paper or tax document from the road. The HP OfficeJet 200 Mobile printer lets you print off your Chromebook from anywhere

“In our testing, we found that on a full charge the OfficeJet was able to push out around 75 printed pages before running out of battery. This should be more than enough to satisfy any mobile professional or college student between plugins, especially when you consider those prints happened at speeds much faster than what you’d get from a competing printer that’s actually plugged into its own power source. The print speed in black and white is 15 pages per minute and offers the duplex printing feature or in other words, two-sided printing. The HP OfficeJet 200 is compatible both wirelessly as a part of Google’s Cloud Ready network of printers, and also happens to be one of the few that Chrome OS has drivers for and can recognize upon being plugged directly into the USB port of a Chromebook (if you decide to go the wired-only route instead). That doesn’t mean there aren’t other printing options like AirPrint, Mopria, NFC, Canon app, and more. And with the Canon app, one can print or scan photos from mobile devices that use iOS or Android easily.

The HP OfficeJet 200 may be the priciest option of the three, but it compensates for that cost by sporting the fastest and highest quality prints on this list, earning it the number one spot for the “best printers for Chromebook in 2019.” And hey, we still need printers these days, since the best 3D printer, cool as they are, won’t print up text for your work assignments. Since you have the best Chromebook, you should have the best printer as well. 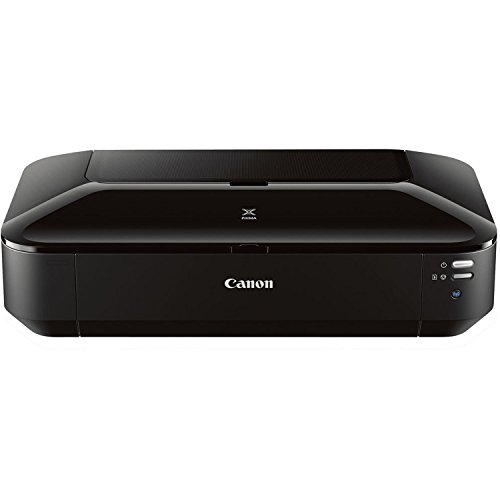 WHY WE LIKE IT: The Canon PIXMA iX6820 is a wireless printing monster thanks to its compatibility with so many different platforms.

While the Canon PIXMA iX6820 may not be as mobile or immediately intuitive to the amateur Chromebook user as the OfficeJet 200, its low cost and extensive wireless compatibility options made it a must-have in our book. It is one of the best Chromebook printers around, with printing speeds of up to 14.5 images per minute. The Canon PIXMA iX6820 is a solid pick for multiple-OS households.

If you’re in a household that runs as many different platforms as there are separate devices, you might want to consider the iX6820 as your next printer. With the ability to connect via AirPrint, Google Cloud Print or through the PIXMA Printing Solutions (PPS) app from your phone, the iX6820 is the Swiss Army Knife of printers, connecting to Windows, OSX, or Chrome OS in seconds. And even if it doesn’t print have NFC as a printing option and doesn’t have duplex printing, this Cloud ready printer is the ideal printer for the best Chromebook, and it is available on Amazon. We love using things like Google Cloud Print. 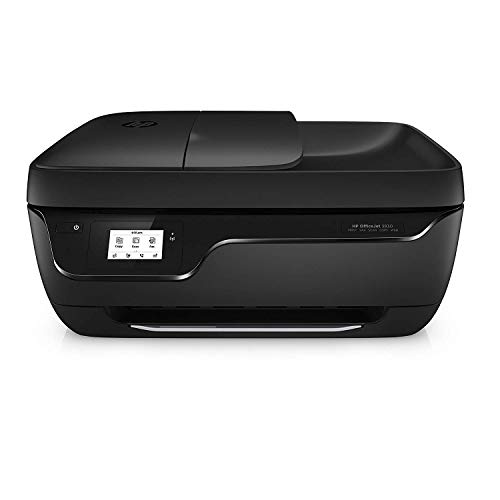 WHY WE LIKE IT: The auto document feeder and onboard touchscreen make this perfect for someone looking for an easy-to-use printer.

The HP OfficeJet 3830 printer is a cheaper Chromebook printing alternative to premium options like the OfficeJet 200. Like the Canon, the HP OfficeJet 3830 comes with a number of different wireless connectivity formats to choose from, including Google Cloud Print, but not Bluetooth. It is a very versatile wireless printer.

“Cooler still, the OfficeJet 3830 also comes equipped with HP’s proprietary HP Instant Ink system, which will automatically order new ink cartridges straight to your door whenever the printer detects it’s starting to run low. This means no more late-night trips to Staples, aimlessly wandering the aisles looking for the right cartridge so your kid can get their book report printed before tomorrow morning. You’ll never run out of ink with this Chromebook compatible printer.

It’s also one of the only printers at this price range (sub-$100) that gives you a 35-sheet auto document feeder (ADF). If you want a fast, cheap, and easy-to-operate photo printer for your Chromebook, look no further than the HP 3830. The HP smart app is pretty good too. It makes photo printing easy. Also, this a Windows and OSX compatible printer, and it is available on Amazon. For your home, read about the best printer for home use.

Note: Other Chromebook printers worth mentioning that did not make our list include the Samsung Xpress M2020W laser printer. This Samsung model offers superior printing quality, and prints envelopes, plain paper, cards, fabric, and labels, and with the Samsung Mobile Print app you can print directly from your mobile device with printing speeds of up to 21 PPM. It is also a Cloud ready printer. Another is the Brother HL-2350DW laser printer with quality prints and printing speeds of up to 32 PPM, as well as duplex printing ability. It has versatile connection options including wireless, USB, and it’s also a Google Cloud ready printer. Lastly, there’s the Canon TS9120 Wireless Printer with a scanner and copier that works with Alexa, and has a 5 inch LCD touch screen and offers hassle free Bluetooth and cloud printing. You can print from all your favorite devices because it allows for WiFi, and Bluetooth connections.

Because the list of printers that are actually compatible with Chromebooks is so small, it wasn’t too difficult of a task to find the best of the best from that short roster. On the whole, we wanted to keep the features and price point in line with what the average Chromebook user can understand and afford, so simplicity and low-cost were the primary focus when making our selections.

The best printer for a Chromebook should at the very least have Google Cloud Print compatibility (to wirelessly connect to your laptop), as well as the option to print both in monochromatic and color without any major settings changes. Compatibility with other cloud services is a bonus. Although the addition scanner would be nice, this extra functionality can sometimes add extra dollars to the final cost, something you want to avoid since Chromebooks are generally considered a budget laptop pick for buyers who are trying to watch their wallet (though the Canon still sports one at a decent price).

Ultimately, we chose three printers that can either be plugged in/recognized by a Chromebook and connect wirelessly if you need it, while also printing quality pictures or text at high speeds. The best printers for Chromebooks offer combination of all these different features in a single package, and won’t cost you (or your budding college student) an arm and a leg to maintain over time.

Features to Look for in the Best Printer for Chromebook

Who Should Buy a Chromebook Printer

As more users wake up to the notion that you don’t only have to choose from a Windows or OSX machine to get work done on the road (or heaven forbid, Linux), Chrome OS is quickly becoming the alternative option for people who need a cheap, functional laptop that just does what you need it to every step of the way. Unfortunately, all that simplicity doesn’t always translate between other devices, printers especially so.

Whether you’ve just bought your first Chromebook or have been using the platform since it was released, printing is something that all of us need to do at least once in awhile, if not every day. As paperless as things are nowadays, there are still plenty of tasks that require you to print something out on a physical page, which is why it’s important to find a printer that’s seamlessly compatible with your Chromebook or any other laptop/desktop in your house.

Buying monochromatic on accident
If you see a printer that’s Cloud-ready, has tons of extra features (scanner, fax, etc), and is also being offered up at a suspiciously low price – chances are you’re accidentally looking at a monochromatic printer, not color. Monochromatic printers are generally much cheaper than color printers, but also only print in black and white. If you don’t need your printer for anything except shipping labels or text documents this should be fine, but if you ever want to upgrade to printing photos or color pictures, you’ll have to buy a whole new unit instead.

Skimping on ink quality
Look, no one likes spending half a house payment on ink cartridges every time they start to run dry, but the best way you can ensure you get every last drop out of your current cartridge is to spend on quality first. Certified cartridges from HP and Canon both last significantly longer than generic cartridges, and will always look better than generic when printing details in larger photos or illustrations.

Which Best Printer for Chromebook Is Right For You?

The best printer for Chromebooks may not necessarily be the best for every operating system, but it’s the kind of compatibility and flexibility you find in models like the HP OfficeJet Mobile 200 that really sets them apart.

Overall these are cheap printers that can still print quality photos using Google’s Cloud Print platform, and don’t get tied up with overly-confusing configuration setups or six different ink cartridges designed to do ten different jobs. If you need something that’s great for students and road warriors, the OfficeJet 200 is the way to go. If you print a lot of photos from home, the HP Envy 4520 might be more up your alley, while the Canon MG7720 is a powerhouse that comes with a scanner and copier for just over $400 flat.

Chris Stobing is a writer and blogger from the heart of Silicon Valley. Raised around tech from birth, he's had an interest in PC hardware and networking technology for years, and has come to Gadget Review to contribute his knowledge on both.