It remains fairly obvious that the Acer XB271HU is out to charm as many gamers as it possibly can. The IPS panel offers a peak brightness of 350 nits, and a contrast ratio of 1000:1 that keeps a neat balance between black and white colors. Connectivity won’t be an issue with the Predator XB271HU as it spots up to 4 USB 3.0 ports, as well as a DisplayPort & an HDMI port. It’s a great choice for a monitor in general, and is very similar to the selections you’ll find in our list of the best computer monitors. The monitor does however require calibration out of the box to deliver the best image quality since its factory settings are not normally tweaked for gaming. 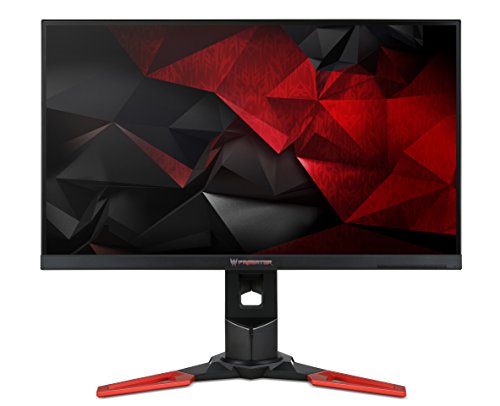 The Acer Predator XB271HU is a premium gaming monitor designed to offer top-tier gaming visuals thanks to its stunning 1440p WQHD resolution, and a 100% sRGB color gamut. Capabilities such as its G-Sync technology for matching the screen’s refresh rate with that of the GPU to help eliminate screen tearing, and its Ultra Low Motion Blur for ultra smooth motion scenes, work together to deliver a spectacular gaming performance.

Announced in 2016, the XB271HU Acer Predator does very little to disappoint in terms of performance. The gaming monitor’s high refresh rate of 144Hz is much better than that of the LG 34UM69G-B. It can even be overclocked to 165Hz, and at this level, you get a highly responsive feel and very smooth motion. Input lag is also natively slow at about 4.6 ms, though it climbs a bit higher to about 10ms with Ultra Low Motion Blur enabled. In both cases though, the difference is still negligible, allowing for super smooth gameplay.

Design-wise, the Predator XB1 spots thin bezels just like the HP VH240a, and a stand that’s got an aggressive styling; quite similar to other products in the Acer Predator range. The stand has a small footprint, but it supports the monitor well with no wobbling. Ergonomics on the XB271HU bmiprz is not too bad, as the display can be tilted, swiveled, adjusted in height and rotated to either portrait or landscape orientation. The Predator XB271HU Acer can also be VESA mounted, and comes with a hole in the back for easier cable management.

As seen in this XB271HU review, the Acer predator comes packed with features that categorize it as a gaming monitor, but it can also serve well in the office, or for media creation. Graphic designers will find the display considerably better than a TN panel, mainly because of the sharp resolution, screen real estate and wide viewing angles. It’s more expensive than the Acer R240HY, but then it has a lot more value to offer.

The Predator XB271HU remains a formidable choice in the wide range of top-range monitors available in the market, though its lack of support for HDR content may make it difficult for some to justify its relatively expensive cost. The monitor does exhibit IPS glow when viewed in a dark room, but then again, this is expected from an IPS panel. All in all, we hope that this Acer Predator XB271HU review proves that it’s still one of the best gaming monitors that you can get.