The Hoover Windtunnel Max UH30600 isn’t just the best vacuum for laminate floors, but for your entire house. With a large dust capacity, several attachments, and a large cleaning path, it’s ready for everything and anything. On top of that, it even captures particles as small as 0.3 microns, a trait befitting of the best bagged vacuum. 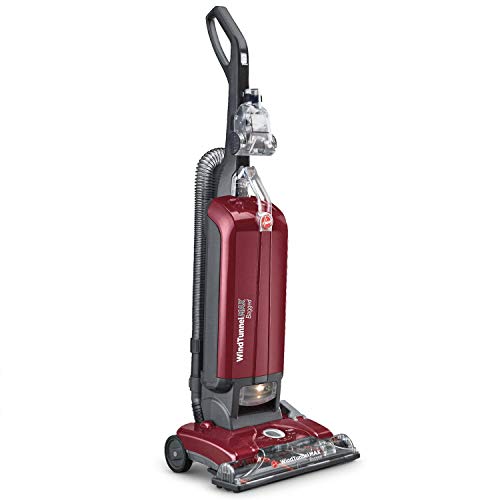 Designed to clean as much as possible, the Hoover Windtunnel Max UH30600 carries with it multiple attachments, a 17-foot above/floor cleaning reach and gathers 99.7% of particulates.

Judging the power of the Hoover WindTunnel Max Bagged Upright Vacuum is best understood when you realize it captures 99.7% of particulates as small as 0.3 microns, including pet hair. It also helps that the inclusion of WindTunnel Max technology, adding 3 channels of suction power instead of one.

The Hoover UH30600 is incredibly efficient. This is largely attributed to its 15-inch wide cleaning path, compared to the standard 12 inches. It doesn’t sound like much, but it’s hard to argue with the results. Its floor cleaning reach is 17 feet, with the hose itself reaching that long.

You won’t find yourself maintaining the Hoover Windtunnel Max UH30600 often. It’s mainly because of its use of vacuum bags, which hold a larger amount than some third party vacuum ever could.

Because of its ability to stretch large distances, the entire Hoover Windtunnel Max UH30600 has to be sturdy, and it is. The hose is especially durable considering it has to stretch as far as 17 feet. It’s bulky though, unlike the easy-to-maneuver Kenmore Elite Vacuum.

There’s very little doubt that you’ll be disappointed with the Hoover Windtunnel Max UH30600, especially if you have no interest in picking up an expensive Dyson V8 Animal Cordless Vacuum Cleaner. And its biggest value is the ability to clean a lot in one go compared to, say, a Shark Navigator Lift Away. But it should be noted, while it’s affordable, you’ll still have to buy vacuum bags.

If you can look past using vacuum bags, (they still serve a valuable purpose), then the Hoover Windtunnel Max UH30600 is yours for the taking. This is especially true if you want to spend as little time moving about the house, given its large cleaning path. Not to mention taking care of most allergens and whatnot.