When it comes to workplace monitors, most of them can be high end with features unneeded, bloating the price with unnecessary features. The Acer ET241Y focuses on just the essentials and delivers a monitor that is as adaptable as anyone can be. With an exceptionally adjustable stand, fantastic color accuracy, and a bezel less screen, the only thing bogging Acer’s monitor down is some brightness issues and a lacking port selection. Nevertheless, the Acer ET241Y makes it into our list for Best Vertical Monitors and Best Computer Monitors. 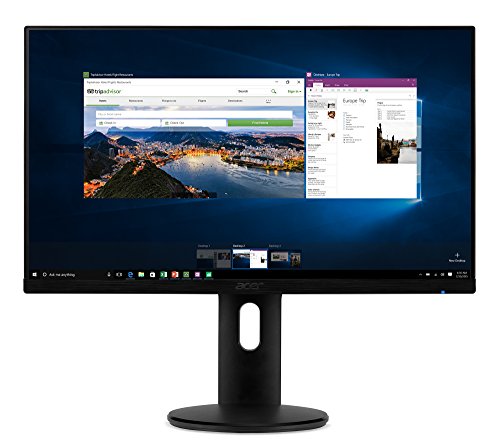 Featuring a full HD picture and a rapid response time the Acer ET241Y helps to achieve maximum productivity with a wide arrangement of adjustment capabilities.

The Acer ET241Ybrings the best performance it can with a full hd resolution. Equipped with flicker free technology, the included 16:9 aspect ratio brings a great picture whether you use it for entertainment or productivity. Along with Acer’s VisionCare Technologies, you’ll be guaranteed the best picture this monitor can offer.

Thanks in part to the fantastic stand offered by Acer, the ET241Y can be adjusted to accommodate any angle. However with viewing angles of 150 degrees, that shouldn’t be needed, as this monitor has a great view from anywhere you look at it.

Easily the best part of the Acer ET241Y is the stand that comes with purchase. Sturdy, versatile, and adaptive, there’s no angle that Acer’s stand can’t adjust to. With a tilting range of 15 degrees, vertical adjustment of 3 inches, and the ability to rotate 90 degrees, the ET241Y can make for an excellent vertical monitor.

By itself the Acer ET241Y’s stand is surprisingly durable given the low asking price. However one feature that would have bolstered it even further seems to be missing. There is no VESA support with the Acer ET241Y. Which by itself isn’t’ a bad thing: the stand included is solid and durable. However those who were looking forward to mounting this monitor will be sorely disappointed. If you’re looking for a mountable alternative, the BenQ PD2700Q is an excellent choice.

The Acer ET241Y comes equipped with an HDMI, VGA, and audio port. Compared to other monitors such as the Dell UltraSharp U2515H, Acer’s monitor has an obvious scarcity of ports to connect to. Even in the professional workplace,

In the pursuit of a budget friendly monitor, the Acer ET241Y makes a strong case for itself with its widely adjustable stand. Along with excellent color accuracy and a practically bezel less screen, the Acer ET241Y is a strong contender for those who are willing to accept the compromises that come with a $150 monitor. A lacking port selection and issues with the brightness are prevalent, but should be minor issues that anyone can get past in this excellent addition from Acer.