Beard dyes these days can be rough on skin—especially sensitive skin. Generally speaking, picking any best beard dye on our list can be safely applied, it’s nice knowing an alternative exists that forgeos chemicals. And that dye is the Light Brown Henna Beard Hair Dye, for its 100% chemical-free formula. 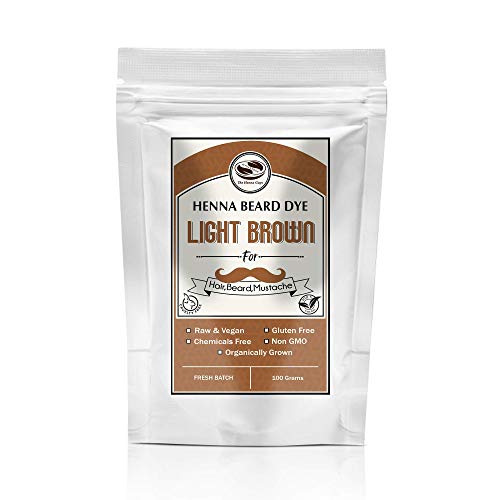 Why We Like It – Light Brown Henna Beard Hair

Despite its name, the Light Brown Henna Beard Hair Dye has different versions based on your beard color such as brown beards, dark brown facial hair, and medium brown color, in addition to light brown hair color. Make sure you have the right kind. Either way, the dye itself can last up to 3 weeks. However, this is based largely on how long you keep the brown Henna beard dye applied to your beard. This is especially true with coarse hair, where more than one application will be needed. Unlike Just Men Mustache Brush Packaging Kit, your results will vary.

More important than its performance is what it’s made of. Too often dyes are made of harsh chemicals. That concoction often leads to irritable skin. Similar to REFECTOCIL Natural Liquid Oxidant Mixing, Henna Guys hair dyes are lacking chemicals; instead, henna and indigo powder are used. There’s less of a chance you’ll experience irritated skin or a bad rash. However, these natural ingredients are primarily why it doesn’t last as long. To make it last longer, you have to go through a lengthy process of mixing the powder with water, applying it, then waiting as long as an hour for the best results.

Is the Light Brown Henna Beard Hair Dye Powder worth investigating yourself? As far as performance is concerned, it does well enough. It isn’t full of chemicals—though you should still perform an allergy test. And it’s vegan and cruelty-free. If any of those stand out to you, then it could be one of the best beard dyes available. It’s perhaps the most eco-friendly beard dye on our list for that very reason, similar to the Grizzly Mountain Beard Dye Organic.

If you’re vegan—or simply don’t like animal byproducts—then the Light Brown Henna Beard Hair Dye is yours. Its henna-based hair dye formula may not last as long as the top entries, but your beard will still look like natural coloring for a few weeks. The lengthy process is the hardest part to push through, however.