A lot of people have come to terms with paying for TV — as in having a subscription service for a cable box or satellite.  But free TV — high-definition –only requires a competent antenna, because digital technology means you either get a picture or you don’t. But what if you’re not able to “buy” a TV picture and to top things off, the broadcast towers aren’t close by? Then an antenna will be just the ticket, providing it doesn’t require hours to put together. That’s like sending out a call for Antennas Direct’s DB8e Ultra Long Range Outdoor DTV Antenna.

It’s a classic “bowtie” with a multi-directional design that can be aimed due to the elements being able to rotate 360 degrees. It’s also more compact compared to other antennas of its signal gathering class, although certainly it’s far too unwieldy for having inside (although an attic will find it quite accommodating). The main purpose of this antenna is to be able to receive a quality signal from a far-off tower; a rural area for example, or where the distance between tower and the residence is great. Or where other antennas have failed to succeed, such as due to heavy foliage outdoors or roofing materials if in the attic.

As I found out once assembled, the DB8e’s great strength is its physical flexibility — making for better aiming control as well as its use in a confined space like an attic. The specs marks it as having an added gain of 17.4 dBI and a signal range of 70 miles, but both of these features are easier to see in use than in discussion. 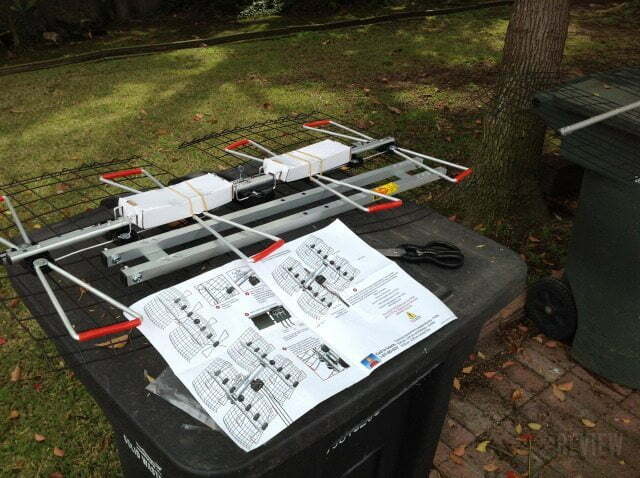 Antennas Direct has preassembled the bulk of the antenna, leaving just a few steps to the owner. No special tools are needed — a #2 Philips screwdriver and a 10mm wrench will do the trick (I used a pair of pliers instead). These instructions are very straightforward and I defy anyone not to be able to assemble this antenna, providing they’ve some patience. My friend Jerry did the assembling while I “supervised” and he had it completed in slightly under 20 minutes, and that included a misstep that required going back to fix.

The kit has everything needed, except the mast to attach to the antenna when assembled or the coaxial cable that needs to run from it to the TV. Because it weights about 10 pounds, the parts were put on a trash can and Jerry started by attaching one of the receive elements to one of the reflectors with the included long bolts in aluminum tubes. This was then done to the other receive element — the diagrams provided in the instructions were very clear as to how to do this. 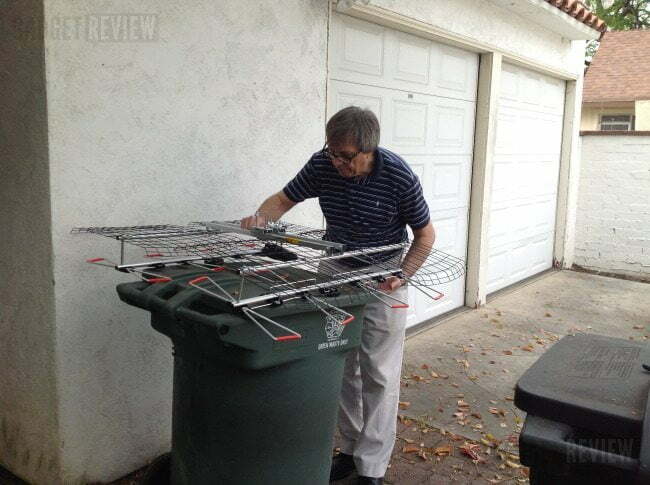 The Cross Bar was then attached between the two elements with the Combiner (for the provided two short coaxial cables) going onto the Cross Bar mount at the bottom using preinstalled screws and clips. Coaxial cables were then connected inside the Combiner (or you can wait until the DB8e is fully assembled to do this as we did). Zip ties are provided to hold the cables on the antenna so that they don’t flop around.  Believe me, it’s easier to do all this than it was to explain it. Fully assembled, the DB8e stood at 48-x-36-by-6-inches (LWD). The next step would be to either mount it on a mast on the roof or position it in an attic. We placed it on a short mast and took it to the attic to see whether the DB8e could get a signal. Why this is a worthwhile test is that we’ve tried a portable HDTV antenna here earlier and couldn’t get a single channel. 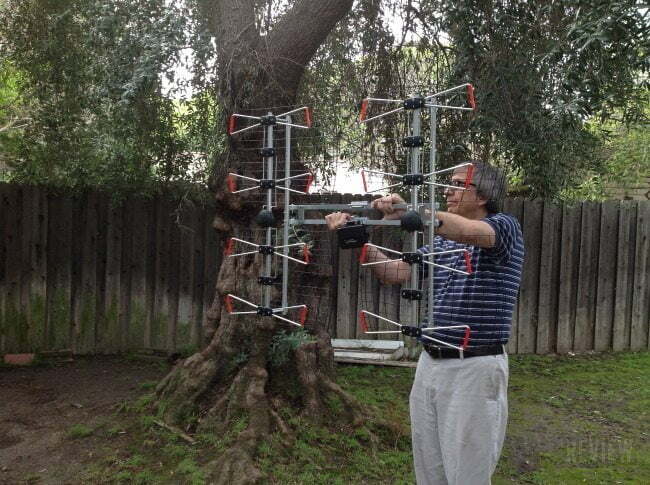 We temporarily mounted the antenna in the attic. Since the elements could be adjusted, we didn’t have to worry about getting it perfectly aligned in the direction of the broadcast towers when positioned, since we could rotate it as needed. We ran the coaxial cable down to the living room’s TV’s antenna input, turned it on and told it to scan for channels. The channels that should be picked up will be those of broadcast networks as the DB8e handles the entire UHF band (channels 14-51). It did and there they were. We ran through the channels and the picture was as good, if not better, than coming off the cable box the TV is normally attached to. We had questioned whether an amplifier might be needed, due to the length that the cable would have to travel from the attic to the TV, but our fears were naught. The signal that came through was right on.

Bottom line: The DB8e Ultra Long Range Outdoor DTV Antenna is surprisingly lightweight for its size and power. $199 retail gets you an outdoor antenna that will “pull” in a signal where other antennas fail. Those looking for free HD television signals and wanting to avoid a huge antenna on the roof will also find the compact design a plus. U MUST HAVE Amplified HD Digital TV Antenna Review