You may be thinking that you’re done looking for the Best TV Antenna when you finally buy and install it. But if you want to get even more channels, or at least a clearer picture of the channels you already have, you might want to check out some Best TV Antenna Amplifier too. The PBD HDTV Preamplifier is a great choice if your antenna is mounted outdoors. 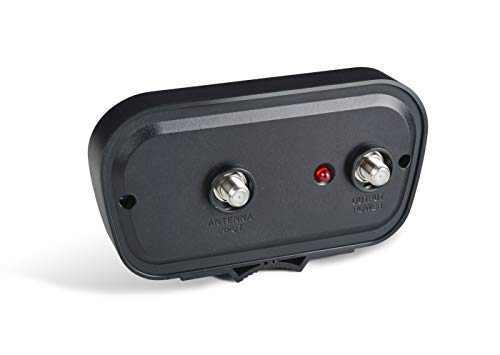 The PBD HDTV Preamplifier TV Antenna Amplifier supports TwinAmp Technology which allows it to receive both VHF and UHF signals. This is important because both local and affiliate channels broadcast in both these formats, so you’ll be getting the maximum number of channels possible.

The PBD Antenna Amplifier Signal Booster HD Digital supports TwinAmp Technology which allows it to receive a TV Signal broadcasted in UHF or VHF. It doesn’t support 4K though, so check out the DrillTop TV Antenna Amplifier if that’s what you need. Further, the PBD also has an LTE filter which boosts the TV antenna amplifier signal strength so it doesn’t pick up LTE waves. You can use this amplifier on a decent TV antenna such as Channel Master Outdoor TV Antenna, and you will always enjoy good quality channels.

First, the PBD Booster Hd Digital VHF UHF Amplifier comes with a three foot RG6 Coaxial Cable. You may think this isn’t a big deal, but you’d be surprised. If you don’t need one, consider the Antronix Four Output Amplifier. Installation is fairly straightforward and many customer reviews have commented on just how simple it is. Just be aware it’s intended for an outdoor non amplified antenna.

The PBD Antenna only weighs one pound, so it’s not going to get in your way at all. But it’s going to be outside so I suppose it won’t be in your way to begin with. As an outdoor antenna it’s also built tough, and should be able to survive any inclement weather thrown it’s way. But if you’re looking for something that can also be used as an indoor antenna, check out the Reliable Cable Product TV Digital Signal Amplifier.

The PBD Antenna can only accommodate one TV because it has only one output port. This isn’t a bad thing or a good thing, it just depends how many TV’s you want to amplify. It should be noted that an amplifier doesn’t necessarily get you more channels, although most do, but can stabilize the channels you already get and remove any unwanted pixelation.

One often overlooked feature when it comes to TV amplifiers is the noise. It’s a machine, so it’s going to make noise. In this case, it makes 1dB of noise, which is barely audible and about on-par, or about slightly lower than TV antenna amplifiers should be. Further, it has a 4/5 star rating on Amazon based on 364 reviews. Always nice to know many people are enjoying a product.

We’re not going to hold too much against the PBD HDTV Antenna for its lack of 4K support because this is a rare occurrence among antenna amplifiers. But despite this, the PBD is a great little unit that will filter out LTE waves for a clearer picture. All while operating silently too.