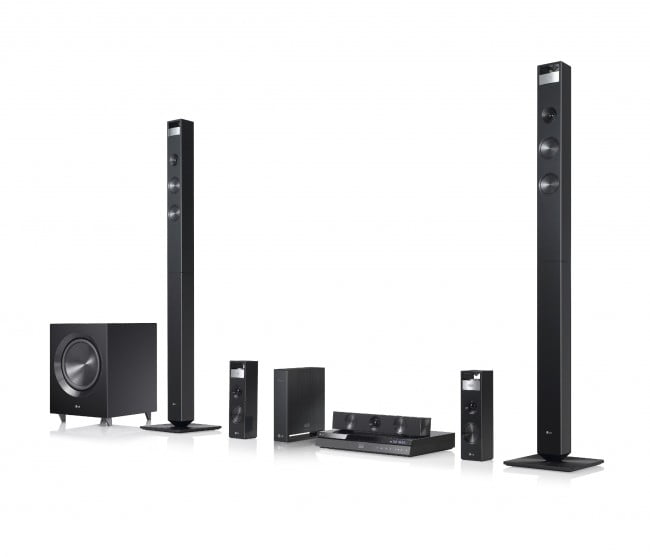 Looking for the best home theater systems? In the beginning the consumer electronics manufacturers created the Home Theater in a Box (HTIB). And it was bad. Real bad. A bunch of cheap speakers tied into a cheap amplifier that could be sold as a cheap way to get louder volume than the TV set. But customer acceptance of the concept didn’t keep HTIB’s from becoming better. Much better. One day they got a DVD player included. The next day a well known company used quality speakers with their own version.

Flash forward to today and you get 5.1 digital surround sound from a full compliment of speakers, powered by an amplifier that doubles as a Blu-ray player. And with Internet capabilities to boot. At least you do, if you’ve just opened the box and started to take out the components for the LG SMART Blu-ray Disc Home Theater System BH9420PW.

Let’s peruse the system from a purely physical point of view first. There’s two front placement speakers (for Left/Right) and they’re a bit over two feet high, glossy black to the eye and slim. These go onto heavy bases so that they’ll stand without incident and a couple of clicks put the two together.

With each of these at a side so as to create stereo, I then place the center speaker horizontally on the TV stand in front of the HDTV. It’s about a foot long and identical in appearance to the others.

Related: Read our Mediabridge Audio Cable review to learn about these auxiliary cables

The subwoofer is a black block, as it should be, and placed off to the side prior to connecting the wires to it. As for the two small surrounds, I’ll place them at the sides and to the rear of the bedroom. Speaker wire goes from them to the wireless receiver, which I’ll plug in for power.

Getting back to the amplifier, I almost forgot to insert the wireless transmission card — so I’ll do it now. I’ll also run a HDMI cable from the first HDMI socket to a HDMI port on the HDTV.

The last thing I need to do for now is to unplug the Ethernet cable from the PlayStation 3 and plug it into the Ethernet port on the back of the amp. Yes, I could have gone with the built-in WiFI instead, but this way all the connections to online will be handled automatically and don’t’ have to worry about any loss of signal strength.

Before turning the LG SMART Blu-ray Disc Home Theater System BH9420PW on, lets finish the examination of the back of the amplifier. Besides that which has already been noted, there’s a fan to keep the internal electronics cool, an Antenna input along with another HDMI input and a Composite video out. There’s also an optical in and a stereo RCA in for audio coming from an additional device. 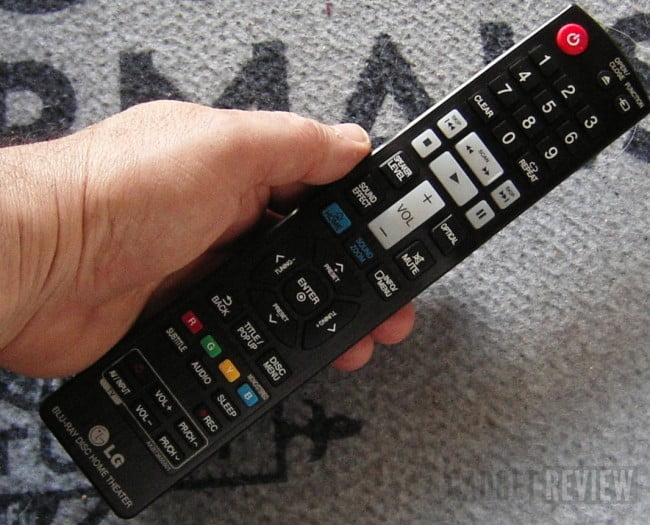 What else do I notice? That the front of the amplifier has controls for the Blu-ray player. And that the full sized remote  has as many buttons and tabs on it as any coming with an audiophile-grade amplifier on the market. But why it has an Open/Close button when there’s no disc tray is one of life’s mysteries.

Oh, the CD-ROM has a full manual included for easy reading online — but for the most part it’s been easy to figure out how to connect everything, thanks to color coding and past experiences with amps and DVD players. 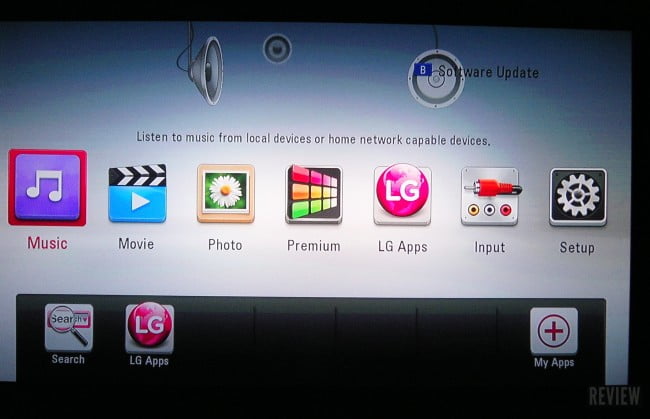 So having plugged in the amp, and noting the green lights on the back indicating that the wireless connect between it and the wireless receiver is active, I turn on the LG SMART Blu-ray Disc Home Theater System BH9420PW. And immediately have to do an update — once I’ve gone through a few setup screens. I hate waiting…..

But once that is done, I’ll check out the menus. Not much to say here —  they function so as to let you control and modify the visual and audio quality that will be occurring. All menus are obvious in what they do, and spending some time “tweaking” them to your personal taste can be beneficial.

So sitting down with a slew of Blu-ray discs, I insert one into the slot and start the show. What you’d expect to see — a high-resolution image on the HDTV — is what you see. There’s no complaints and for all practical purposes it’s a standalone Blu-ray player encased in an amplifier casing. And that goes for playing 3D too — keeping in mind that the HDTV’s qualities must also be taken into consideration too. 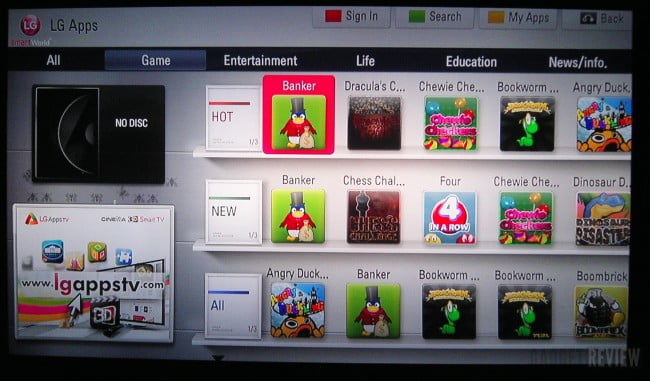 But what I found the most enjoyable was the online aspects — for all practical purposes the LG SMART Blu-ray Disc Home Theater System BH9420PW mimics the “Smart TV” capabilities of the LG HDTVs. So that means you can download and use apps, view online areas (including 3D) and in general enjoy the Internet, courtesy of LG.

Now the sound from the speakers, besides working as they should to create a sound field with a center channel for dialog and surrounds for ambience, is surprisingly good. Considering that plastic enclosures are being used — which I’ve never found to be as “warm” as wood — it could be that the improvements in audio reproduction over the years has finally overcome the deficiencies of plastic. Not that these speakers are of an audiophile grade that would make me lose my Polk towers, but in general I can’t say there’s any real complaint. Especially when listening to dialogue and subdued audio where detail can easily be muffled by distortion. Then again, the majority of people don’t even know the difference in qualIty of audio, considering that digital audio from iPods and the like has become the “standard” in their ears. Speaking of which, there’s a plug for playing an iPod/iPhone into the system and controlling it from the remote as well. Plus Bluetooth for doing the same with a multitude of devices that can stream music. 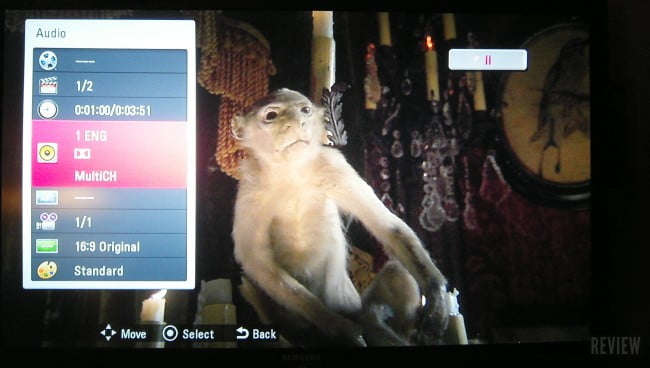 Theres also the DLNA standard which can be used to connect a PC with the system for viewing video and photos, or listening to audio. This is true as well for a USB thumb drive/hard drive inserted into the front-mounted USB socket (BD-Live content can also be saved to a drive in the socket).

I should add that the surround effect modes that are available do work effectively when non-surround sources are being played. Here it’s a bit of personal perception, but their addition makes for a usable work-around when non surround sources are played. So if you pass a cable box/satellite receiver or use an external antenna for watching television, you’ll probably be employing one of them. 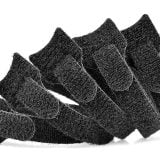 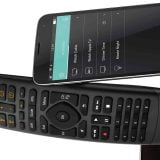 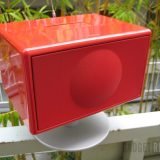 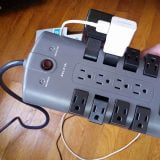