The Hitachi Magic Wand is rated as one of the most effective sex toys by hundreds of thousands of women around the world, and the go-to device for anyone that wants to experience an orgasm each time without fail. The wand was originally meant to be used to massage sore muscles and other parts of the body that might be aching, but its popularity surged once women realised the effect that it has on the clitoris. With the original Hitachi Magic Wand being first introduced in 1968, the wand has undergone considerable revisions since then, and added a number of exciting features that take things to the next level. In this review though, we want to get you acquainted with the Original Hitachi Magic Wand, see why it remains one of the best adult toys ever. 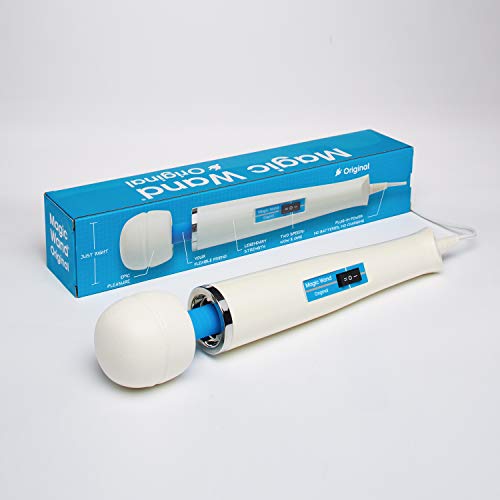 Once you get the Hitachi Magic Wand, you’ll find that it’ll be very difficult to find another sex toy that matches its performance. With its lowest vibrational setting at 5000 RPMs and a power cord that connects to the wall, it would be very surprising if you’d still be unable to get an orgasm with it.

With up to 6000 vibrations per minute, the Original Hitachi Magic Wand outdoes the Paloqueth G Spot Rabbit Vibrator by far, and is probably the most powerful sex toy out there. The vibrations are intense, and can definitely be heard through thin walls. Most people agree that the noise made equates to the sound of like five bees, but they also agree that you won’t be using it for a very long time due to its powerful effect. You’ll also have to plug it into a wall socket to get it working, and with only two speeds to choose from, operating it is as simple as it gets. Despite having an RPM speed of 6000, the vibrations will only be felt on its head and barely on its handle.

At a foot long and weighing almost 1.4 pounds, the Original Wand Magic by Hitahchi is bigger and weighs a lot more than the average sex toy. Nonetheless, this is a small price to pay for the power and satisfaction it delivers. It’s only available in a blue and white color scheme, and also comes with a 6-foot long power cord for attaching it into your wall socket. There’s only two speed levels to alternate between, and for most women, that’s more than what’s needed to climax. For men that are interested in a masturbatory aid, the Treediride Vibrating Male Masturbator Cup might be worth looking into.

With the resounding success that most women have had with the Magic Wand, it’s no surprise that there are some companies and manufacturers that would also want to cash in on its popularity. This has resulted in a lot of knock off versions flooding the market, and causing a lot of confusion and disappointment among customers that don’t experience the level of excitement that they were looking forward to. When you go ahead and buy this product, make sure that it’s being sold by Vibratex. This is the brand that bought the manufacturing rights and licenses from Hitachi once they stopped manufacturing the Wand in 2012. Also, if you have a male partner that you’d like to introduce into the world of sex toys, the Phanxy Silicone Dual Penis Ring might be a good place to start.

The Hitachi Magic Wand has been considered quite intense especially for users who don’t have any real experience with vibrators, and even for those that do, it’s normally the closing event once all their other vibrators have gotten them warmed up. You should therefore buy it according to your experience with sex toys, but if you feel like it takes a lot more than it does most people to get you to your peak, then go ahead and give it a try.