Pen15 Is a tv show about middle schoolers. If I already lost your interest, check out The Handmaid’s Tale instead. Maya and Anna are best friends going through seventh grade together. During their first days at school, they fixate on their crushes for boys. They still enjoy childish activities like playing with dolls and prank calling people, but as they grow older they partake in other activities like smoking and drinking. This series is on our list for the Best Shows On Hulu. 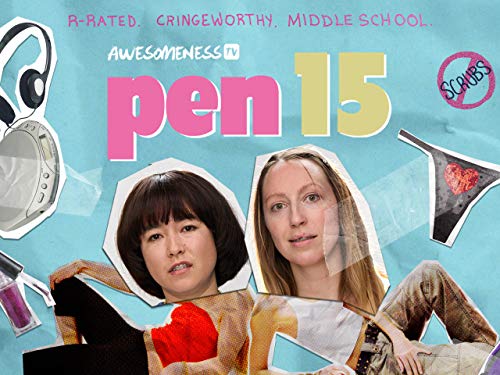 Pen15 is a drama about kids in middle school. Maya Ishii-Peters and Anna Kone are starting seventh grade. Their world revolves around their crushes, appearances, and other things in the usual 13 year olds’ agenda. In this series, we will watch these kids go through some of the biggest changes in their lives.

Maya Erskine stars as Maya Ishii-Peters. Anna Konkle stars as Anna Kone. Taj Cross is Sam Zvibleman. Maya and Anna play their roles of middle schoolers well, but their older appearance threw me off every time. Aside from the obvious age gap between actors and their role, the show feels like the cartoon Big Mouth because they cover the transitional age where kids start learning more about themselves and start to have new interests. Another show that will keep you as entertained as Pen15 is Bob’s Burgers.

Prepare to suspend your disbelief when watching this show. Our main protagonists are playing middle schoolers, but they clearly look way too old for these roles compared to the other students around them. It sets up these awkward interactions throughout the series as things heat up between the girls and boys, but it is understandable why Maya and Anna played these roles as the girls begin to experiment with themselves. Another series to watch from our list is Atlanta, a show about rappers coming up.

This is a good show because it makes you reminisce about your middle school days. While the students here seem to be living at a much faster pace, there are some areas that are spot on with the middle schooler’s mindset. This first season will take you back to some of your first time experiences. Another show comparable to this is The Act, a true crime story where a daughter goes through changes and begins to resent her mother.

Pen15 is a good show that highlights some of the struggles we went through as middle schoolers. The situations make you reminisce on the school days, although it seems that these kids grew up a little too early. There are many moments here that will bring you much-needed laughs.