The ADATA SD700 External SSD is a ruggedized external drive capable of taking a beating, both on land and underwater, and still keep going. Combined with consistent performance and award-winning design choices, it’s no wonder the ADATA SD700 ranks as one of the best storage devices currently on the market. 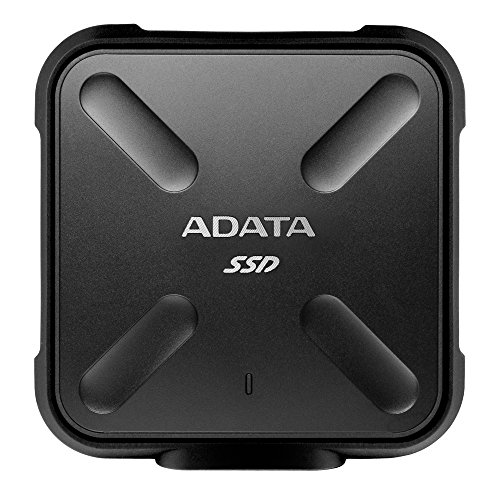 Why We Like It – ADATA SD700 External SSD Review

Boasting an incredible amount of resistance, the ADATA SD700 External SSD is the only portable SSD on the market that is IP68 rated. The ADATA SD700 is a great external drive for those who are constantly, or even moderately, on the go who are also looking for quick storage.

The ADATA SD700 External SSD uses Silicon Motion, Inc (SMI) SM2558 paired with Micron’s 384Gbit TLC 3D NAND. This makes for some interesting specs, including 440MB/sec read and write speeds, which is 4 times faster than traditional external hard drives. If that’s still not fast enough for you, the Samsung 860 EVO 1TB may be more up your alley. It is formatted exFAT straight out of the box, so it will work with Mac and PC immediately. Unfortunately, there is no USB-C cable, so you’ll need an adapter for newer technology ports.

The design of the ADATA SD700 External SSD is where it shines. This storage device is military-grade dust, water, and shock-proof, and will maintain full functionality after being in 4 feet or water for 60 minutes or dropped from a height of 4 feet. It passes IEC IP68 specs, and because it’s a solid state drive, there is no moving parts inside, making it silent and durable, doesn’t heat up, and consumes far less power. If you require an external SSD but don’t care how rugged it is, the ADATA SU800 is a fantastic alternative that’s great with desktop computers.

With all that ruggedness packed into a single portable SSD, and the military-level resistances, you would think it looks like an ungainly piece of military equipment, but it doesn’t. In fact, the ADATA SD700 won the Good Design Award from Japan in 2017, Performance Recommendation from PC Ekspert in Croatia, and the Editor’s Choice Gold Ward from MegaObzor, Russia, among many others. It also weighs in at only 3.5oz. Still, if you’re looking for something ultra-slim and light to carry around with you, the Silicon Power A55 is an excellent, and super-slim, external SSD that’s particularly good for ultrabooks.

The ADATA SD700 External SSD boasts a fair price point for its speed. But its ruggedness and durability are where it vastly outperforms all other portable SSD’s on the market. It’s biggest drawback is the exclusion of the USB-C cable, meaning only people with the most up to date PC’s, Mac’s, and smartphones will be able to use the ADATA SD700 without having to give over more money for an adapter.