The Monoprice MP Voxel is a hobbyist’s choice for a 3D printer. Sure, there may be a ton more out there that may be more accurate or have a bigger build area, but it’ll be hard to find one for less than $1,000.00. But if you are looking for something like that, check out our best 3D printer list to learn more! 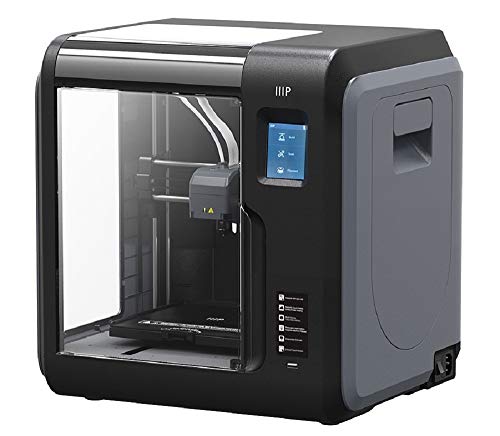 Setting up the print bed on the Monoprice Voxel is as easy as a single tap on the touch screen interface. It’s inexpensive, but doesn’t skimp on print quality, and is based in the United States. Not only will you be supporting a local company, it’ll also be easier to get parts should you require them. And if you’re on the market for a video and sound transmitter, have a look at our ultra-fast 60GHz wireless 4K UHD transmitter-receiver review.

The Monoprice MP Voxel is ready to use straight out of the box but if you need or want to you can adjust the bed leveling and its distance from the nozzle via the menu system on the touch screen. The included quick start guide is quite helpful in this regard, and it’s straightforward and easy to use. The LulzBot Mini 3D Printer also features this easy-to-use bed levelling system. You can also print using wi-fi or an ethernet cable and you can even use your Voxel as a hotspot, which is pretty cool. Just be aware there can be some buggy wi-fi connection issues which makes printing a little bit of a hassle sometimes.

The Monoprice Voxel comes with a removable, heated build plate, and the filament spools are easy to set-up. Just load the filament spool in a space on the side of the Monoprice MP Voxel and feed it up through a tube into the printhead. The Voxel also works with the Polar Cloud which also supports the printer’s built-in camera so you can see the print progress via a smartphone or tablet. If you’re printing stereolithographic things and need a very tall printer, the XYZprinting Nobel 3D Printer should have you covered.

Overall, the Monoprice Voxel offers a lot for its $400.00 price tag like high print quality and a decent-sized, fully enclosed build area. If you want versatility with an open or closed build area, try the Zortrax M200 3D printer. Comparing the Voxel to the Flashforge Adventurer you’ll discover the two units are almost identical, but Monoprice is based in the United States so it may be easier to find parts or other things you may need. Unfortunately, it’s unlikely that a non-Monoprice spool would fit into the spool holder, but it would be hard to find a filament for less than what Monoprice charges, so there’s good and bad with this.

With support for cloud printing and a heated print bed, the Monoprice MP Voxel is at a sweet-spot in 3D printing. It’s not going to cost you an arm and a leg and it’s going to give you good printing quality for the price. Just make sure you have an Ethernet available in case the Wi-Fi goes buggy as the machine is prone to do.