When looking for ways to save money in your household, you might consider getting a new box fan vs an air conditioner. Both devices have their uses, but they work better when combined since sometimes even the best air conditioner may not create enough air circulation for your space. Instead of a box fan, you might want to grab a high-end tower air conditioner.

Differences Between AC and Box Fans

Although the most significant difference in temperature stems from the cooling method (dry mode vs cool mode for example), you likely want to consider the energy efficiency and cost of a box fan and air conditioning system. The two appliances move or cool the air in varying size spaces with different energy costs.

Fans activate a process in our bodies that makes us feel cooler by moving the air around.

However, you will most likely want an air conditioner if you are looking for a single-appliance solution for cooling your home. In most cases, you would need multiple fans to cool the entire space throughout your house. If you’re looking for the most energy-efficient model or the best bang for your buck, learn about BTU vs ASHRAE measurements.

An air conditioner cools the air in your house by sending it through several elements, starting at the AC unit. The air passes through a compressor, condenser coils, air filters, evaporator coils, ducts, vents, and more before being released into your house at a lower indoor temperature than it started. The system uses a refrigerant to cool the air actively, but it also removes minute particles and humidity from the space.

A box fan circulates the air in your space with minimal chilling effect. As the blades spin, they pull in and move air and spark a natural cooling effect in our bodies through sweat evaporation. Setting a box fan in the window will help pull fresh air from outside, but you should have all windows and doors open to maximize airflow and circulation speed.

An air conditioning unit is expensive to install and run. The power needed to start and run your system remains substantial, even on the best models. However, the cost may be worth it if you are in a ‌hot or humid climate. In addition, you won’t have to control the AC using buttons and remote control features nearly as often because you set up routines on your thermostat.

Box fans are relatively cheap, providing a cost-effective option for those in mild climates. They do not last long as air conditioners or cool the air. You may need to run your fan constantly. The energy costs associated with running box fans are significantly less than an AC.

Whether you want to lower the temperature by a few degrees or more, you may need to run your fans for longer. However, they do consume less energy while they run. As a result, box fans present less need for maintenance, though the efficiency decreases as the motor is worn down.

Air conditioners use more energy while running, but they cool the house as you want them to. So, in terms of power consumption, they consume more power. However, they are more efficient when lowering the temperature in your home. If you want to save some money while your AC runs, you could add a fan to the mix to maximize circulation and its effects on our bodies.

Running an air conditioning system is often costly, so you may want to use a box fan to lower your energy usage.

STAT: Approximately 17% of the energy we use in our homes goes to air conditioners. (source)

How do fans cool you?

Fans circulate the surrounding air, speeding up the process of convection and evaporation. In other words, the air warmed by our bodies is moved swiftly past us, so we feel like the temperature is lower.

How do fans cool your home?

Fans cool small portions of your home unless you have a whole-house fan. They move the air around us and circulate the heat with cold air for a more even temperature with a higher speed.

Is it cheaper to use a window fan or AC? 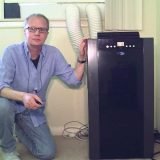 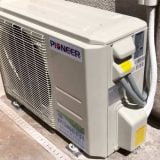 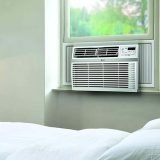 Do I Need A Permit To Replace Air Conditioner 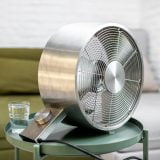 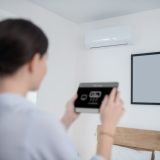 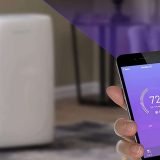 How to Unlock AC Thermostat