When it comes to portable air conditioners, the systems used to rate them, namely DOE BTU vs ASHRAE BTU, have many differences. The acronyms themselves can be confusing for consumers. However, both DOE and ASHRAE use different measurements.

Read on to learn what these abbreviations mean and how they measure the efficiency of your portable air conditioner. We’ve also listed other abbreviations at the bottom of this article that may be helpful in your search.

DOE vs ASHRAE: How Are They Different?

The most significant difference between the DOE and ASHRAE rating systems is the association or department that set the standards and when they did so. Additionally, you can find differences in how ratings are used and the testing they undergo.

If you aren’t sure which A/C system to choose, keep reading. Just remember, these ratings are specific to cooling your house. They do not represent any additional settings, such as dry mode vs cool mode on an air conditioner. You should also check out similar acronyms that you may see on portable AC packaging.

The U.S. Department of Energy (DOE) felt that portable air conditioners needed their own rating system, which led to the creation of the DOE British Thermal Unit (BTU.) We measure heating and cooling power in BTUs, with one ton equalling 12,000 BTU per hour of cooling. Some experts recommend using the DOE rating to determine the best air conditioner when the choice depends on your square footage.

Before this system, the efficiency of portable units was measured using the American Society of Heating, Refrigerating, and Air-Conditioner Engineer (ASHRAE) guidelines. These rules were pre-determined for window air conditioners, and the two types of ACs shared the same methodology.

The DOE believed there were several inefficiencies specific to portable units that existed within the old rating system, including mixture and infiltration of unconditioned air. To address these issues, the DOE proposed new testing standards using a calorimeter and a few other measurement devices.

These new testing methods require portable window AC units to undergo a series of tests that include airflow monitoring, ducts, and additional instrumentation. This is done alongside the ANSI/ASHRAE standard to determine the cooling capacity of window ACs and portable air conditioners. Then, the collected values are combined with the measured infiltration of heat and humidity deductions to create the DOE rating for the unit. As a result, the DOE rating is typically less than the ASHRAE rating.

ASHRAE ratings are not specific to portable air conditioners, so you may want to check the DOE rating as well.

Does it only affect portable AC units?

The new rating system provided by the Department of Energy (DOE) only affects portable AC units.

Why do we use both BTU ratings on our products?

The DOE requires both its own and ASHRAE’s ratings to be listed on products.

What is a “ton” of cooling?

A ton of cooling equals a cooling rate of about 12,000 British Thermal Units per hour. This term represents the effect a unit has on the temperature and moisture content of the air that passes through an AC unit. More tons can cover larger spaces.

STAT: A minimum efficiency of SEER 13 is recommended, though high-efficiency ACs may be cost-effective. (source) 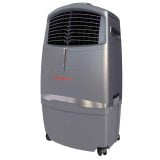 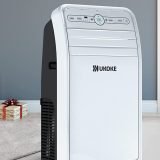 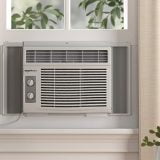 What is a Good SEER Rating? 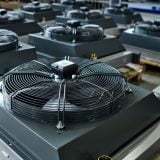 How Big of a Generator Do I Need to Run a 5,000 BTU Air Conditioner? 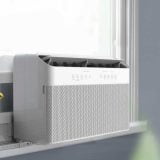 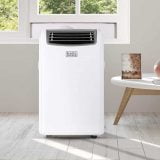 How to Install a Window Air Conditioner in a Mobile Home