Need a bench vise you can install and leave alone, something that can provide an adequate service when necessary? With steel jaws, a 360-degree swivel base, and an with a large surface area, the Heavyduty Forged 360 Swivel Locking Desktop is the best bench vise to have when those special projects occasionally pop up. 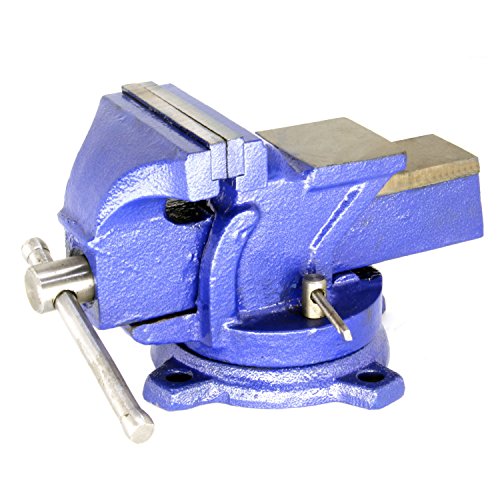 Why We Like It – Heavyduty Forged 360 Swivel Locking Desktop

Featuring plenty of anvil space and a swivel base that can rotate an entire 360 degrees, this bench anvil can be put to good use on a casual basis.

Striking while the iron’s hot is the best feature hte Heavyduty Forged 360 Swivel Locking Desktop offers with its large surface area. What helps even more is have a 360-degree swivel base, allowing you to strike that very anvil at any angle you feel comfortable with. While that’s all well and good, the Heavyduty Bench Vise Anvil Forged Steel Locking Swivel Base is lacking in clamping force. It isn’t bad, but it isn’t great either. At 600 pounds of force, it sits near the lower end of the spectrum compared to the Yost Vises 445 Utility Combination’s 3,150 pounds of force.

The Heavyduty Forged 360 Swivel Locking Base Desktop Clamp went with a common blue design. It’s made of cast steel so it’s relatively strong durability will surely last for several years to come, which is nice considering how cheap it is. And if the hardened forged steel jaws wear too much, you can always replace them rather than the entire tool. Unfortunately, those same jaws lack pipe grips. Further still, once the base is installed, it’s permanent—just like the Wilton 11104 Bench 4 Inch Opening.

When considering price and overall design, the Heavyduty Forged 360 Swivel Locking Desktop price tag of $40 sounds about right. It isn’t the most powerful on the market; in fact, the Irwin Tools Clamp Vise 226303 is even less powerful than this bench anvil, and it’s nearly the same price. In other words: the Heavyduty Forged 360 Swivel Locking Desktop performs better and is priced better as well. If you need a bench vise for casual use, excluding pipe work, then this is a solid alternative for a low budget.

The Heavyduty Forged 360 Swivel Locking Desktop isn’t going to impress you with its power and design. Its clamp force is good enough for most projects, excluding pipe grips. What it can do is give you ample space to work with on the anvil, and a 360-degree swivel base to work around. It falls firmly in the category of “budget and casual use.”