If there’s a game you’ve always wanted to play, the Asus ROG Mothership GZ700GX will play it. And yes, it’s one of the best VR ready laptops you wish you had. Who wouldn’t want an RTX 2080, 9th Gen Intel i9 and 128 GB of RAM? It even has one of the funkiest designs you’ll ever see. It may also be the best gaming laptop you’ll find today. 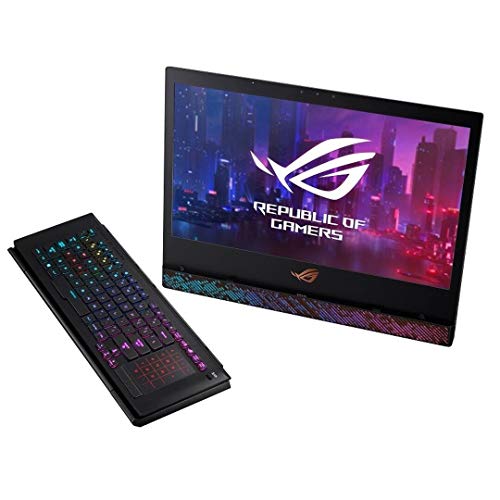 Crossing the line between 2-in-1 and laptops, the Asus ROG Mothership GZ700GX’s funky, yet pleasing design hides impressive specs, like an RTX 2080, 128GB of RAM, and an 9th Gen i9.

The RTX 2080 is still no slouch, despite being 2 years old. It has 8GB of GDDR6, with 128GB of RAM on tap. Overclockable up to 5GHz, the Intel Core i9-9980HK has 16 threads and 8 cores. It displays in full HD, 144Hz, with G Sync to smooth out screen-tearing and stuttering, which the Alienware M15 lacks. With specs like that, you’ll net around 40fps on ultra-high playing Half-Life: Alyx.

Related: Read the ASUS ROG G752VT Gaming Laptop review to see how it may be better for you.

Battery life fluctuates depending on how you use the keyboard. When detached, you can expect around 5 hours; when attached, it drops to 4 hours. For someone who works 8+ hours a day, that’s plenty of time to play.

RGB lighting aside, the real quality comes from underneath. Airflow isn’t trapped, but flows freely due to its kickstand, then released from the top. And that’s not counting the eight heat pipes and two fans, all contained within a metal chassis. It makes the MSI Stealth GS65 look inferior by all accounts.

The Asus ROG Mothership GZ700GX skirts the line between laptop and desktop, a kind of hybrid 2-in-1 design. Its cooling alone can match your average gaming desktop, while its performance is to die for. And convenience? It begs to be on-the-go. What holds it back from being enjoyed is the $8964 price tag. Yikes! That’s the cost of some beater cars. The Alienware M17 is just as capable at near a fifth of the cost.

Price is the biggest drawback to the Asus ROG Mothership GZ700GX; otherwise, we’d recommended everyone go out and get one. It’s the cost of some beater cars! That doesn’t stop it from being one of the most well-equipped laptops around. An RTX 2080 alone is excellent, but then it adds 128 GB of RAM and a 9th Gen i9. And it’s cooling system means you never worry about overheating.

Turn Your Xbox One S into a Laptop with XBOOK