What could possibly be the best laptop for students due to its fast processing speed and merciful price, the HP Pavilion 14 is a laptop that has a decent battery life and great compatibility with various devices. It also has a lot of disk storage for users to store high quality videos and images. 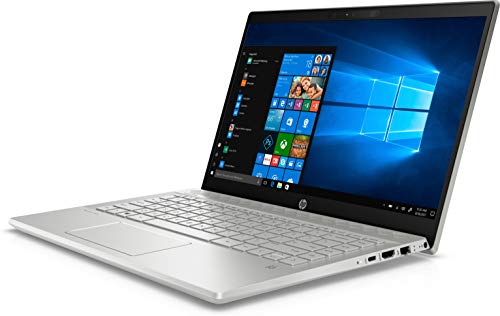 The HP Pavilion 14 has a fast processing speed in addition to having an impressive amount of storage space. It also has a great assortment of ports to provide compatibility with various devices, and has a graphics processor that consumes less power while processing above average graphics.

This laptop contains an Intel Core i5 processor to provide fast performance in a way that’s similar to the Dell Latitude 7490. Also like the Dell Latitude, it has 8 Gbs of RAM to allow the user the option of multitasking between programs that can require more resources, and both laptops contain the integrated Intel UHD Graphics 620 unit as the graphics processor of choice. It’s not the newest graphic processor, it can process modern graphics with lower power consumption.

There’s a nice, varied assortment of ports that consist of a SD card reader, an HDMI, Ethernet, USB Type-C, a headphone/microphone, and USB 3.1 ports, having more types of ports than the Dell XPS 13 7390. It also has a useful bonus perk in the form of versatile wireless connectivity, having the ability to 802.11b/g/n/ac Wi-Fi standards as well as Bluetooth. Most of the ports provide fast data transfers rates due to being the newest versions of their types, allowing the user to have great compatibility with modern functionality.

Due to having a traditional hard drive, this laptop doesn’t have an ultra slim design. However, because of that, it’s able to provide more features such as having different ports while being slim enough to not risk having components loosen and travel in the chassis. It still maintains a lighter weight of 3.1 Lbs., weighing about half as much as the Dell G5 15 5590. However, since the chassis is made of plastic and not metal, it’s less durable.

What makes this laptop stand out is how it has a cheaper price despite having a 1 TB hard drive. That’s due to it containing a traditional hard drive instead of being a solid state drive, which would offer less disk space if you try to find a SSD drive that matches the 1 TB HD’s price. Other components such as the high quality webcam and graphics card can also determine the laptop’s cost.

Customer reviews have mostly been positive, praising it for its performance and visuals. However, some reviewers have thought that a protective case would make the laptop better. As a HP staple, if you ever need help, hp support should be able to suggest some solutions if your problem is common enough.