MSI GS75 Stealth RTX 2070 Gaming Laptops may be a thin and light gaming laptop, but the inside is more of a fat and heavy destructive machine. It boasts an absolutely incredible CPU, GPU, and RAM, and the 144Hz refresh rate ensures you have the cleanest, smoothest gaming experience possible. 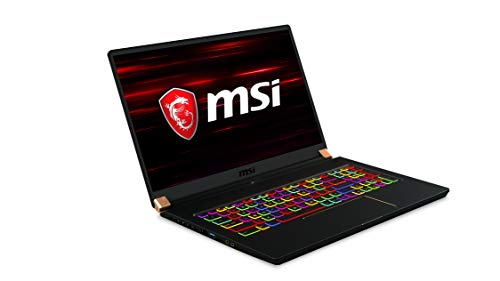 The MSI GS75 Stealth RTX 2070 is another in a long line of MSI gaming laptops that can make mincemeat out of even the most graphically-intense video games. The absolutely expansive 32GB of RAM is the biggest we;ve seen so far and shreds through anything you throw at it.

The MSI GS75 Stealth RTX 2070 is powered by an Intel Core i7 processor, an Nvidia RTX Graphics Card GeForce 2080 Max-Q, and an incredibly powerful 32GB of RAM. The graphics card puts even the Acer Predator Triton 500 RTX 2060 to shame so gaming performance on games like Tomb Raider is top notch, and the RAM absolutely shreds through anything you throw at it.

There are bound to be some trade-offs for a powerful gaming laptop such as this one. Battery life is the trade-off here, with the laptop clocking in at around two and a half hours, give or take. Well, well below the average for gaming laptops, you should look elsewhere, such as at the Gigabyte Aero 15, if you need something with better battery life.

For a thin laptop, the MSI GS7s Stealth has a healthy variety of ports. On the left are the power jack, an Ethernet port, one USB 3.1 port, a microSD card slot and a headphone jack.The right holds a security lock slot, an HDMI port, one USB Type-C port, two USB 3.1 ports, and one Thunderbolt 3 port. Great for on-the-go gaming, check out the Asus Rog Zephyrus S Ultra Slim Gaming Laptop for another example of a port-friendly laptop.

The MSI GS75 Stealth puts a lot of competitors to shame with its measly five pounds of weight and ultra-slim design for easy carrying. The keyboard features a per key RGB design that’s just incredible and something you’d definitely expect from a laptop at this price range. The 512GB NVMe SSD, however, does feel a little restrictive for gaming, but we have seen laptops with a lot less.

The display is 1080P and features both ray tracing and a refresh rate of 144Hz. Combine this with the powerful GPU and you have a gaming experience with minimal to no screen tearing. The MSI Dragon Center App also lets you monitor the CPU, GPU, and memory and optimize for performance via modes like Sports or Comfort, and even lets you adjust fan speed.

While the 512GB SSD isn’t necessarily bad, it does feel a bit restrictive. The battery life is where the MSI GS75 Stealth loses a bunch of points. But for a gaming laptop as powerful as this one, and for the price that it is (we’ve seen much more expensive for cheaper specs), you know they would have had to sacrifice somewhere.