If you’re looking for top desktop speakers that are well built, affordable, and easy to install, you need to take a look at the Logitech Z130 stereo speakers. These black little speakers look pretty decent, and will sound just great if you use them for watching a movie or gaming. You’ll find all its controls on the right speaker, and at a cost of less than $20, it remains a value buy for anyone that doesn’t want to spend a lot for a good listening experience. Could it possibly be one of the best computer speakers to go for? Go ahead with this review and find out.

The Logitech Z130 computer speakers may seem small, but they pack a lot of punch despite their size. They’ve both got front-facing reflex ports for better bass, and with the 3.5mm headphone jack on the right speaker, you’ll easily be able to plug in your headset for private listening.

Unlike the Logitech Bluetooth speakers Z600, the Logitech Z130 speakers are a compact set that delivers crisp stereo sound, as well as strong bass thanks to a front-facing reflex port. They beat out the Bose Companion 2 Series III multimedia speakers in that regard since you won’t find any bass module on them. Since the right speaker is the main unit, you’ll find the power volume controls as well as the headphone jack on it, and with 5 Watts of total power, you’ll be able to get super clear sound from the two speakers.

Even though the Logitech Z130 speakers are only available in black, we don’t have the slightest problem with that since they still look really good, just as good as the Audioengine A2. The volume control is in the form of a small knob that you also use to turn it on or off, and there’s a small LED indicator next to it that’ll light up when it’s switched on. This is somewhat similar to the TaoTronics TT-SK018 which has its volume knob on the right, but being a soundbar, you’ll need to find a central position where you’re going to place it.

As compact as these speakers are, they still provide a decent amount of bass, so we have no qualms about sound quality. They weigh about 1.3 pounds, and the cord connecting the two speakers is about 4 feet. Some users might find this quite short, but it’s pretty standard for most computer speakers of this size. The major difference between this and the AmazonBasics USB-powered PC computer speakers is that they’re USB powered while the Logitech speakers are not. Otherwise, you’ll get the same amount of sound quality from both.

This Logitech speaker system is guaranteed to give you quality sound, and at about $20, you’ll probably be getting more value than it’s worth if you go ahead and buy them. We also advise going through some of the comments that were left by the customers who bought it from Amazon to see what you should expect. 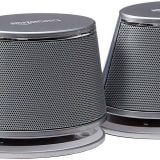 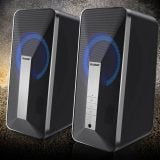 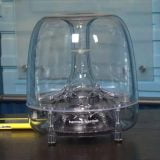 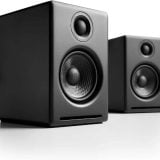 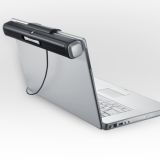 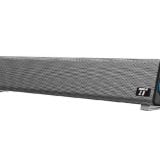