A Brief History of Computer Monitors

Nowadays screens and displays are everywhere. Computer monitors, however, have had a long and storied history, dating back more than 70 years.

A Brief History of Computer Monitors

As long as there have been computers, there has been a need to visually understand what they are doing. Computer monitors date back to the first computers. This is long before we had full array local dimming, so it’s pretty ancient.

Early computer monitors are unrecognizable from today’s best, modern monitor counterparts. The first displays were, essentially, a number of light bulbs. These lights would be turned on or off to indicate what components of the computer were being used at any given moment. Most visual data in the early days were printed out on paper for engineers to look at. This simple bulb-based design dates all the way back to 1897, having been invented by German scientist Karl Ferdinand Braun.

Tip: Most visual data in the early days were printed out on paper for engineers to look at

Computer monitors took an evolutionary leap in 1973 when the Xerox Palo Alto Research Center developed the first prototype design that resembles modern displays. This monitor boasted a cathode ray tube (CRT) design that was reminiscent of televisions. This monochrome display eventually shipped as part of the company’s Xerox Alto computer. At this point in their history, they weren’t even called monitors. These devices were known as visual display units. Interestingly, Steve Jobs of Apple was a key investor of Xerox in the later phases of their research into computer monitors.

Tip: At this point in their history, they weren’t even called monitors. These devices were known as visual display units

The Rise of LCD Displays

Throughout the 1980s, CRT displays continued to evolve, offering an array of colors and higher overall resolutions. In the early 1990s, however, a company called Eizo Nanao Technologies developed the LCD display. A liquid-crystal display (LCD) is a flat-panel design that uses light-modulating liquid crystals to offer visual information. These monitors were lighter and more efficient than their CRT predecessors. LCD monitors were originally a niche product, due to the expensive nature of the internal components. That all changed in 1998 when Apple created the Apple Studio Display, which is generally considered to be the first affordable LCD design. LCD monitors are still extremely popular.

Tip: LCD monitors were originally a niche product, due to the expensive nature of the internal components

Many modern high-end computer monitors are based on OLED designs. Organic light-emitting diode (OLED) displays offer a significant increase in resolution and color accuracy. They tend to display deep black levels, due to their design, and can easily reach popular resolutions such as 4K and beyond.

Some estimates suggest that the average American is glued to some kind of screen — television, mobile devices, PCs, etc. — for upwards of 400 minutes per day, which translates to roughly 40% of our waking hours.

Are LED and LCD the same thing?

Which is better for gaming, LCD or LED?

We would recommend a full-array LED display for gaming purposes, though results may vary depending on make and model.

Can I use a normal TV as a computer monitor? 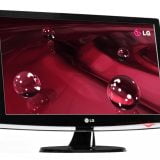 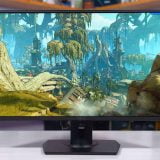 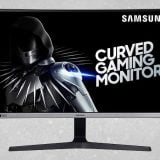 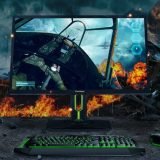 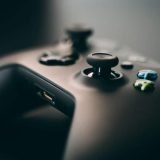