The ASUS ROG Strix XG17AHPE is a mid-range portable gaming monitor that was first released in 2020. Similar to the most popular computer monitors in its category, it features a 17.3-inch IPS LCD screen that is capable of reaching up to 240 Hz of native refresh rate for fast-paced gaming.

Read our ASUS ROG Strix XG16AHPE review for a look at its sister model.

The UPERFECT Portable Monitor’s 10-bit screen easily beats the ASUS ROG Strix XG17AHPE’s 8-bit display when it comes to color reproduction and preventing banding. It also surpasses the XG17AHPE in terms of peak brightness, as it features a 500 Nits panel against ASUS’ 277 nits. However, ASUS’ model knocks the UPERFECT Portable Monitor down a few notches when it comes to gaming, thanks to its 240 Hz screen against UPERFECT’s 60 Hz.

Our top critics mostly praised the ASUS ROG Strix XG17AHPE portable monitor, as they loved its 240 Hz screen for gaming. Product reviewers from RTings.com were glad to note that its built-in battery performs as per the brand’s claims, and the monitor produced similar results in their battery life tests. They also applauded its 98.2% sRGB and 83.2% Adobe RGB color gamut coverage for consuming and editing content on the go. They measured its pixel density at 129 PPI, which is also excellent for text-based work, similar to the ASUS ROG Strix XG27AQ.

However, expert reviewers from Tom’s Hardware weren’t fond of its excess IPS glow-in-dark scenes, and they measured its contrast ratio at just 1174:1 in their tests, just like the ASUS ZenScreen Go MB16AHP. They were also sad to see the omission of HDMI 2.1, as its micro HDMI (2.0) port can only handle 4K at 60 Hz, not 120 Hz. 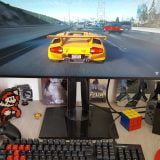 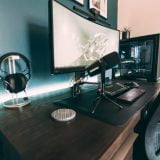 What is 2K Resolution? 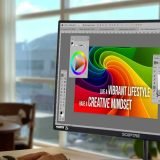 Best Monitors for Call of Duty in 2022 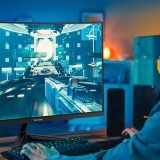 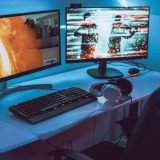 What is a Monitor’s Refresh Rate?