Some people carry their iPads with care and are conscious of their surroundings. The ProCase iPad 9.7 2018 2017 iPad Case strikes a nice balance between protection and aesthetics, with a few additional features—Apple Pen holder, multiple viewing angles, document pocket. It might be the best iPad case for work. 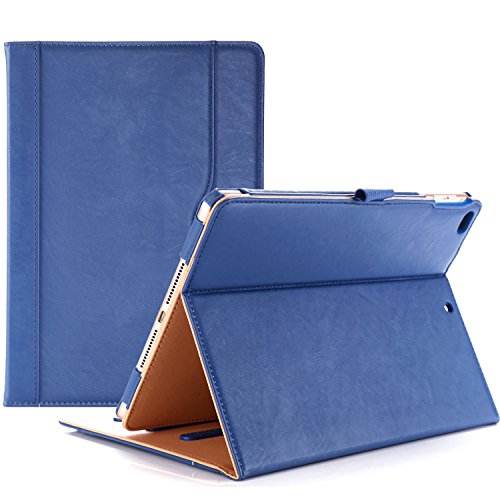 The ProCase Gen iPad 9.7 2018 2017 iPad Case did a good job doing what ProCase set out to do: an aesthetically pleasing case with basic protection. Wielding this case felt so natural, and with how well various model iPads fit inside, it never threatened to wiggle its way out; the iPad fits so snug.

Two notable features were the built-in pen holder and the Auto Sleep Wake front cover, which turns your compatible generation iPad on when the cover is opened and puts it to sleep when closed, a feature shared with the Moko iPad Case.

This ultra slim smart cover hard shell case doesn’t provide the best protection compared to other iPad cases. It’s made of durable PU leather—synthetic leather—and does a good job of creating a cushion against the floor. It can fit a 9.7-inch iPad (generation model number A1822), but can also fit iPad Air Model 2 and Apple iPad Air. You’ll be able to choose from a plethora of cover case color options such as navy, glitter silver, gold, purple, red, teal, and more.

There is one glaring issue: the side where the front cover is opened doesn’t have any protection in place. Not just we, but other people found that it can cause some damage should you drop your iPad Pro. This was also an issue with the ESR iPad Case. And just in case you need an iPad upgrade, you may want to take a look at some of the best features of the Apple iPad Air 2, which has several significant updates to the original Air.

This folio case has a lot going for it, not just because of performance. The additional features really went far with us when we later reviewed it in a work environment. Features like the card pocket and built-in Apple Pencil holder were a godsend to have at a moment’s notice. Not to mention having multiple angles. And we loved all the color options available. Considering its overall design and performance, we definitely give this our mark of great value, especially if you’re picking up a new iPad. It’s a nice balance between protection and style. If you want something slimmer, consider the ProCase iPad 9.7 Case For 5th 6th Generation.

The ProCase iPad 9.7 2018 2017 iPad Case did its job and did it well. It wasn’t anything fancy, but was certainly a boon in a working environment. With multiple viewing angles and an Apple Pencil holder, it’s easy to prop it into position and get work done. While bumpers would have been nice near the opening and stronger magnets, the iPad would often go in a bag anyways, away from any potential accidents. And if you’re looking to upgrade your iPad 2, the iPad Air will be a huge improvement, and you can know why by reading our review of the best Apple iPad Air features.