The iPad has been long sought out as a laptop replacement. Thanks to how powerful the current generation iPad is — and how the soon-to-be announced next-gen tablet will be — that is becoming more and more of a reality for many. With over 300,000 iPad specific apps and hundreds of accessories to help take the place of everything from keyboards to Wi-Fi boosters, it’s more likely than ever before. I seriously believe that the best iPads will have the ability to bridge that gap.

The iPad mini, on the other hand, is far less powerful and far smaller. The screen resolution is half that of the iPad. The build quality is better, and it’s better to hold one-handed and to read off of, but that’s all. The full-size iPad is the productivity tool; the iPad mini is better for web browsing and media consumption. So New Trent’s Airbender Mini NT31B is a strange case to test because, after all, the iPad mini isn’t really made to take over as a laptop.

Furthermore, most keyboard cases are released for the iPad, not the mini, because an 8-inch keyboard is too small. Heck, most people think that a 10-inch keyboard is too small. The Apple Wireless Keyboard, generally considered the smallest full-size keyboard, is 12.8-inches across; iPad keyboards can work with some limitations, but the only iPad mini keyboard that works is Logitech’s own Ultrathin Keyboard Cover for iPad Mini. And as much as it works, it doesn’t promote the mini into a productivity device…and frankly a keyboard that just works is good enough, not something you should use regularly. Maybe if you want to use it to play games. Speaking of games, you should check out the Monopoly here now the world edition iPad review. 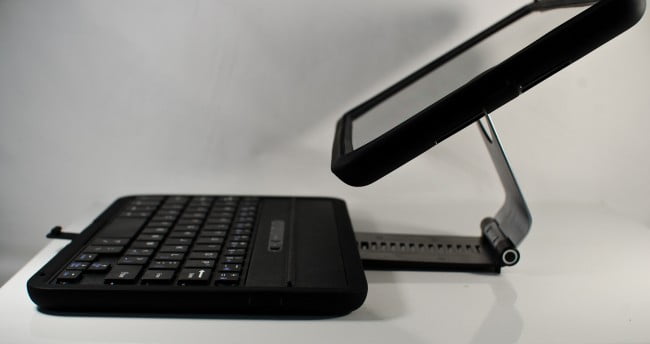 The Airbender Mini takes that whole thought process a step further by making the case a protective brick. This is the sort of thing that a construction worker would use because it could survive a nuclear blast. With a slide-on rubber coat over a thick plastic frame (and a screen cover to boot), nothing is getting through the Airbender. In fact, the insulation is so great that it’s actually a problem. After I put the Airbender on, I couldn’t take the darned thing off without damn near breaking the case. The plastic clips aren’t made to ever be taken off. Actually they are, but the iPad mini is so thin that you’d need the hands of a Tamarin to open it without a knife. For a quality cover for your iPad, check out the New trent ipad case review.

Aside from the chillingly-thick frame, the folks at New Trent did remember that yes, this is the iPad mini, and it shouldn’t be stuck to a keyboard at all times. So it’s connected by an aluminum slab that slides into and out of the keyboard, a brilliant but not fully fleshed out idea. It’s great because the Airbender retains it’s “case” status by still protecting the iPad, though the aluminum is still connected to the iPad, not the keyboard. This means if you want to just read off of the iPad, there’s a nice cumbersome piece of metal hanging off of it at all times. Wonderful. 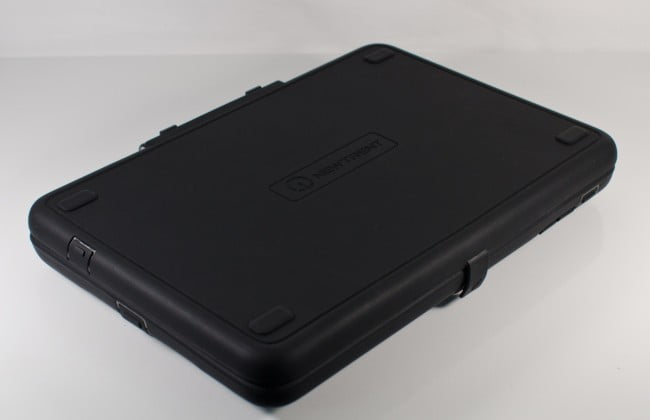 And on the topic of that slide-in spectacle, in theory it makes perfect sense for quick removal and using the iPad in multiple ways. The problem is that the iPad doesn’t rest as comfortably as it should. It lacks the stability a keyboard case should offer. The Airbender does keep the iPad steady, but barely so. It’s not even properly placed, nor is there a proper placement to hold the tablet. It just sort of hangs in the air over the keyboard, which wouldn’t be a problem if it stayed put when shaken, but it doesn’t. It wobbles and doesn’t keep its form.

The final loss of status is the rechargeable battery. It doesn’t automatically go to sleep, so if you leave it on it’ll drain the life out of your iPad mini and out of the keyboard itself pretty quickly and without remorse.

All that combines into a potentially good but in general weak product, but here’s the kicker that changes everything: the Airbender Mini is only $40. For just $40, I could live with plenty of the problems of the Airbender. And if you have no interest or plans to ever remove the iPad mini from the case, then the New Trent Airbender Mini NT31B is a great option and a sweet deal. But if you’re looking for more, then there is a long way to go for the Airbender.

Bottom Line: Great keyboard, surprisingly sturdy, but it’s built and designed like a brick. But for the price, it’s even worth just trying out. 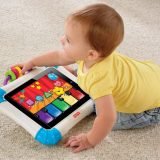 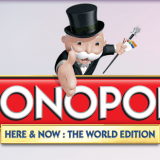 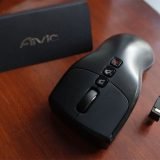 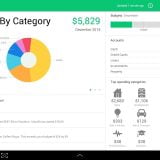 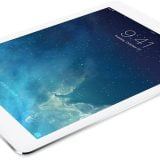 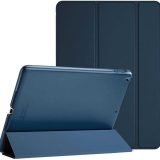