So you’re an editor of some kind, working on a Mac, and need the best monitor for Mac Mini that crosses into the territory as the best video editing monitor, too. It just so happens the LG Ultrafine 5K was made for you. Covering most of the DCI-P3 color gamut, it’s the perfect companion for color accurate projects. 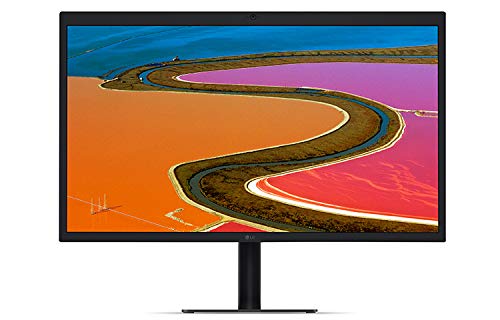 A collaboration between LG and Apple, the LG Ultrafine 5K was designed, from the ground up, to be a 5K resolution companion for your iPad Pro, MacBook Pro, and more.

Supporting 10-bit coloring and 99% of the DCI-P3 color gamut, vivid coloring is a hallmark feature. And with a 5K resolution, pixel density on a 27-inch display looks breathtaking. However, LG only limited the contrast ratio to 1200:1, which is 200 above average. It has a 14ms response time, a not-so-good rating for gaming, so stick with an Asus TUF VG27AQ.

Viewing angles are fantastic! Lean 178-degrees one way without seeing hardly any change to picture quality. With someone hovering over your shoulder, and off to the side, they’re getting the full take on your work.

Hard plastic for the chassis, metal for the stand. It’s durable enough, the stand being the MVP. Shake your desk and it hardly moves. The Dell Ultrasharp U2415 may shake too much for your liking.

Someone fell asleep when designing the LG Ultrafine 5K. This is strictly a Thunderbolt display. Along the side are four Thunderbolt 3 USB C Ports. Since the majority of the Apple Store has Thunderbolt, that leaves Windows users out of luck, unless your PC uses USB Type C cables, which is doubtful. It even left out the audio jack, leaving you to deal with the subpar 5W stereo speakers.

Windows users aren’t going to be interested in the LG 5K Ultrafine Display—but for those of you who have a small, 15-inch MacBook Pro, this was made for you. This is especially true if you aren’t upgrading your laptop and just need a bigger display. After all, it’s $799, which is significantly cheaper than a MacBook upgrade. If you’re Windows, check out the Samsung 32 Inch Curved Monitor Costco; they haven’t abandoned you.

Only Mac users will make full use of the LG Ultrafine 5K. What else did you expect from a monitor that only has Thunderbolt 3? When it does get utilized, boy does it look good. A 5K resolution is already fantastic, but on a 27-inch screen the pixel density looks amazing. That’s in addition to 99% DCI-P3 color gamut coverage, but average contrast ratio.