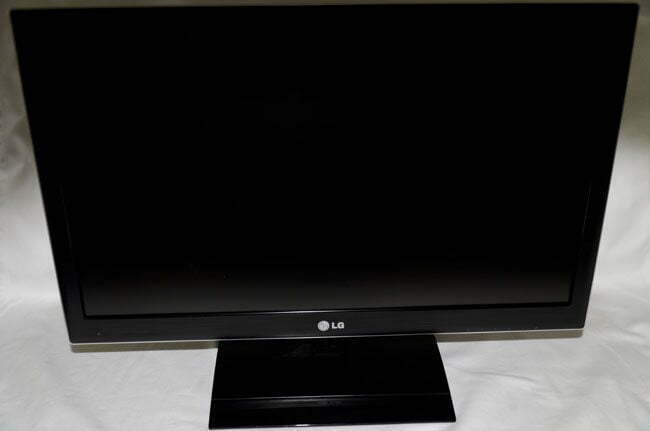 I’ve never heard of a gaming monitor built with a response time over 5ms. It’s unheard of. And yet that’s what LG sent me to review in the E2370V-BF, a poorly named 23” 16:9 display with some interesting features…and a response time of 14ms. Is it one of the best gaming monitors under 200? How does it stack up against the best computer monitors?

Still there? Good, because if you’d clicked elsewhere you’d be missing out…unless you can actually see ghosting firsthand on a game console. I mean, I can…but I am surprisingly pleased with the display.

The E2370V-BF – or E70 as LG insiders call it, so I’ll stick with that because the full name feels robotic – is a widescreen 23” 1080p (1920 x 1080) display. As a 4:3 fanatic who gets that the world is going squinted, I now contend that 16:10 is the more natural aspect ratio, but really do like the E70 regardless of getting off on the wrong foot initially. Setup is painless: connect the stand and plug it in. No need for tools. At 8.6 lbs by itself and 9.6 lbs with the stand, the E70 is bloody light. Compare that to my recently purchased Dell 2408W (for color-correctness with photography and video), and LG’s monitor feels like IPS vs. CRT.

The non-glossy display has excellent viewing angles, rated at 178°/167°, and that certainly holds up. If viewing from too high or too low the brightness plummets, but the picture remains accurate except at the extremities (corners). The only connectors are a single DVI and two HDMI connectors, which fits perfectly on my desk, where my work Xbox 360 and PS3 sit, along with my PC (we’ll get to console-gaming quality later on). There’s even an audio jack (3.5mm) for consoles and set-top boxes, just in case you aren’t streaming directly to your speaker system. The E70 does not come with built-in speakers, and only transfers audio signals to another connected device. 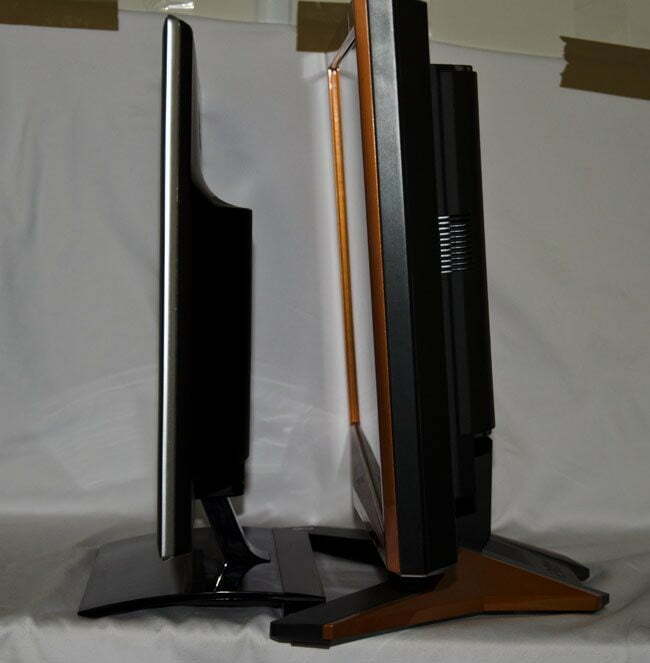 Considering the $275 price tag, it isn’t a surprise that physical features are limited. It only tilts between 5°-15°, and the slanted base looks and feels more appropriate for a TV stand than a computer desk. However, the lightweight more than makes up for the physical obscurity. It would require one heck of an earthquake to push the E70 over. It’s also worth mentioning that it’s a very cool display, one that doesn’t get physically hot after extended use even on very high brightness settings. Compared to the majority of displays, the E70 is like a frisby to a refrigerator; thin, lightweight, and fun to play with.

Related: If you prefer something different, check out our LG 49WL95C W review.

What I think is perhaps the most brilliant feature, and my personal favorite, is the dedicated remote control. This tiny handheld only has 13 buttons, but don’t let that fool you. After setting up the display to your liking (adjusting colors, brightness settings, user settings, etc.) that remote will practically rid of the need to touch the E70 ever again. I do so only out of the habit of switching my dual-display setup on. Besides that, I use the remote for everything, from switching between my PC and a game consoles, adjusting the user settings, adjusting volume and brightness, or even utilizing picture-in-picture so I can continue working while my PS3 updates for the billionth time. And thanks to the sleek design, dark color and easy usability, it fits so nicely on a desk that I can’t believe we don’t all have monitors with remote controls already. The convenience is taken to a whole new level. Just find me a complaint department because not having remotes for our computer displays is a damn tragedy. 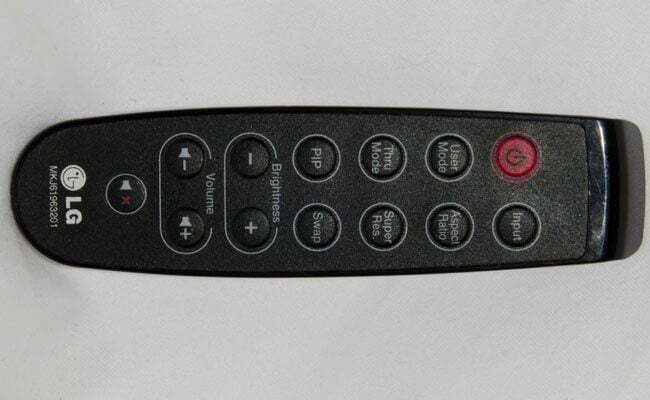 The remote is a brilliant introduction for a computer display. Why didn’t anyone think of it sooner?

Picture quality on the E70 is so-so. It’s not built for correctness like a professional display, and if you plan on using it for everyday computing, occasional gaming and quick picture and video editing, then know that this display is just fine. However, if you’re interested in the finest of details, know that color contrast is generally lacking at the extremes, and pretty significantly. Light contrast, however, is surprisingly accurate. I was able to tell the difference between the two darkest shades of black at maximum brightness, a rarity on most displays. Furthermore, I can see those differences at multiple viewing angles. The same applies to whites.

Sharpness is very good, and the E70 includes a feature called Super Resolution, which basically performs anti-aliasing through the display. In computer applications, it over-sharpens the screen to the extent where your eyes will bleed. For gaming, especially console or streaming gaming (like OnLive), it can help if you enjoy sitting farther away but images don’t pop enough. It’s an interesting concept, with minimal actual applications. I rarely found use for it while testing various games because of the high quality of overall sharpness already.

The real problem occurs with ghosting, which has to do with response time. As expected, ghosting is extremely easy to spot on ghosting tests, and the E70 ranks poorly among monitors I’ve tested when it comes to ghosting. Though frankly, I’ve never tested a display with a response time slower than 5ms, so it’s not entirely unexpected. So while it’s the biggest detractor on the display, and likely the biggest stopping point for half of the potential gamers interested in purchasing the device, the E70 is not intended for those who care about response times, meaning PC gamers. It’s for console gamers who are used to lag from their TVs and wireless controllers.

Two HDMI, one DVI and one VGA (plus a 3.5mm stereo port) makes the E70 fit for at least two consoles
and a computer, plus an additional device…like, say, an iPad.

With PC games it isn’t easy to notice ghosting even at 14ms. I did, in some fast-paced white-knuckle games. However, playing on a service like OnLive or just in online matches, ghosting was never an issue while testing the E70. The E70 also has a feature called “Thru Mode”, which is supposed to improve on the reaction time and speed of images. It doesn’t, at least not noticeably. I’ve switched it on and off and haven’t been able to tell any difference.

The E70 is definitely a display I prefer for console gaming, where lower resolutions and expected lag make the slow response time a nonissue. The Super Resolution also improves the clarity in-game quite a bit, though text on-screen can cause some eyebleed.

LG made a decent monitor, and it may well be for gaming…just not PC gaming. Ironically, the audience for consumers interested in a console gaming PC monitor is insignificantly small. Who wants to play console games from their desk, in front of a computer? Most don’t. As a journalist, I find it comforting for obvious reasons, but the average user will just get a multi-purpose 23″ TV with no cable input. Still, the E70 is a strong display with great features and a solid build. I highly recommend it. 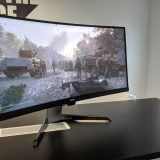 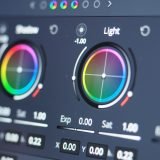 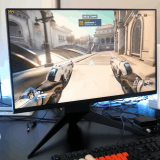 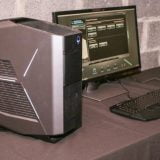