How to Make a Portable Air Conditioner

If you are just blossoming into the world of DIY cooling, you may wonder how to make a portable air conditioner. Some of the best air conditioners, after all, are portable so who wouldn’t want to make one? But is this even possible and how do you get started? Keep reading to find out.

How to Make Portable AC Units

There is no universally accepted process here, as techniques vary like when you learn how to make a solar-powered air conditioner. Having said that, here are a few of the most popular techniques.

These are all great to try even if you have a dedicated air conditioner, as they all require much less energy than a standard AC unit.

Try learning how to make an air conditioner out of a bucket. This is a fairly simple process, though does require a bit of forethought and tools. Basically, you’ll be cutting an exhaust vent hole out of the side of the bucket and attaching a vent hose. Next, you’ll fill the bucket with ice and other frozen items. Finally, place a fan so that it blows air directly into the bucket and out the exhaust. Voila, you have yourself a bucket air conditioner.

Another option involves a box fan and some ice. Start by filling up some water bottles with water and letting them freeze entirely overnight. Next, place the water bottles in front of the fan at a distance of around six inches. Power the fan on and allow it to blow air through the frozen water bottles. The resulting air will be cooled significantly. After the ice melts, simply refreeze the water bottles. Some people also manually affix the water bottles to the fan using tape or string. Adding salt to the water before freezing helps it resist melting for a bit longer, as a tip.

This is the exact same method behind the bucket AC, but styrofoam is easier to cut than a plastic bucket. Simply cut out vent holes on the cooler, fill it entirely with ice, and position a fan on top directed at the ice. Power the fan on and allow the cold air to exit the exhaust vents. As an added bonus, styrofoam coolers are extremely budget-friendly, so if you mess up during the building process simply get a new one and start over.

How does it work?

These DIY ac units work, essentially, by engaging a fan mode and having the fan blow air into frozen objects or ice. This creates a difference in temperature.

What are portable air conditioners?

Portable AC units feature all of the benefits of a traditional AC, only smaller. They often come with remote control, a power button, a drain plug, a water reservoir, and more.

How do portable air conditioners work?

They work just like window air conditioners or other models, just with a smaller form factor. You need access to outdoor air to enable the cool mode.

STAT: In 1558, Giambattista Della Porta described a method of chilling ice to temperatures far below its freezing point by mixing it with potassium nitrate (then called “nitre”) in his popular science book Natural Magic. (source) 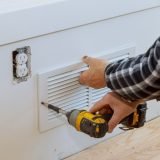 How to Move an Air Conditioner Unit 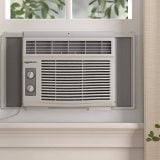 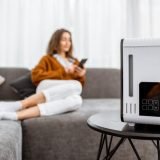 How Long Does an Air Conditioner Need to De-Ice? 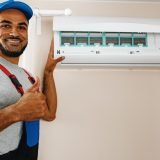 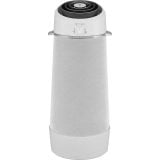 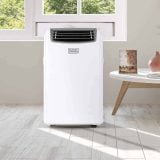