To help you with your search for the best serpentine belt, we examined over 20 products, ensuring that their materials are heat- and stretch-resistant, useful in a variety of car models, and designed to produce minimal noise during operation. Curious to know which car models are the best to buy? Check our vehicles guide. 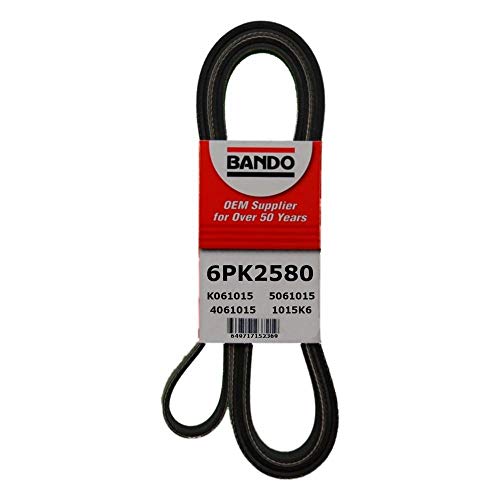 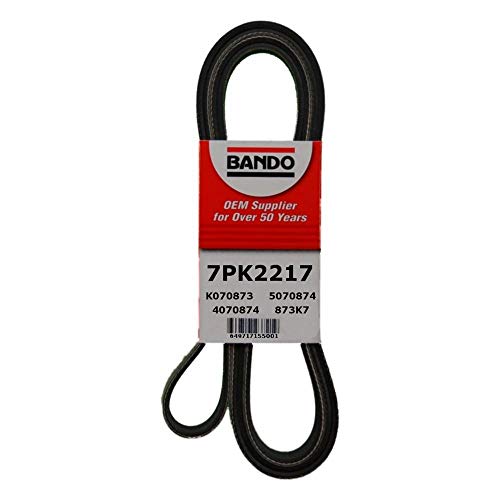 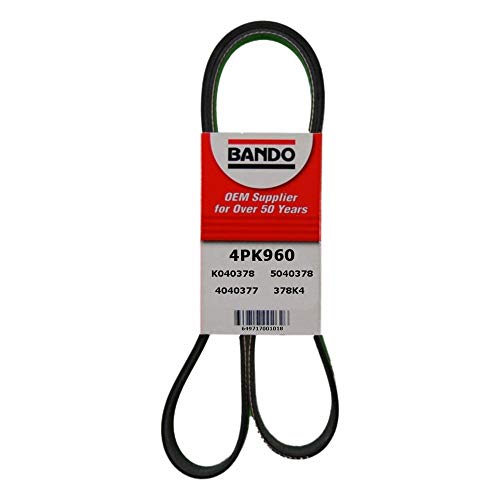 Our top pick, the Bando 6PK2580, possesses these excellent qualities thanks to its ethylene propylene diene monomer (EPDM) construction, Run Quiet design, and compatibility with 10 vehicle brands with models spanning over two decades. Keep reading to discover more about this Bando belt and our other highly recommended products.

Our #1 Pick is the Bando 6PK2580 Serpentine Belt
Check Price

WHY WE LIKE IT: Besides its superb material, this Bando belt’s strong tensile, bi-directional cords and Run Quiet design will ensure the smooth engine operation if you own a Chrysler, Chevrolet, Dodge, Ford, GMC, Hyundai, Jeep, Kia, Mercedes, or other vehicle included in the list below.

The Run Quiet design of the 12.05-inch-long and 0.8-inch-thick Bando 6PK2580 ensures that your belt operates quietly as it winds around the pulleys of your engine. The belt is made of compounded rubber and strong tensile cords that are resilient to the wear and tear resulting from oil and heat exposure. It also features a bidirectional cord that minimizes tracking problems.

WHY WE LIKE IT: Another product from Bando’s Rib Ace Line, the 7PK2217 is best for Nissan and Suzuki engines. It offers the same Run Quiet technology and heat and oil resistance as the 6PK2580 but is slightly wider than our top pick with its seven ribs.

This Bando product is just as thick as our top pick but it is longer, measuring 2,217 millimeters (87 inches). Just like the Bando 6PK2580, the 7PK2217 belt is made of EPDM and tensile cords that allow you to run on high horsepower without stretching. Its “less slip, more grip” Run Quiet technology reduces the chances of misalignment that results in squeaking and other sounds.

Bando 7PK2217’s high-strength synthetic rubber serpentine belt will provide quiet engine operations for any of the following vehicles: Nissan (Frontier 2005-2019, Pathfinder 2005-2012, Xterra 2005-2015, and NV 2012-2015) and Suzuki Equator 2009-2012. When disposing of my old belts, I like to cut them in half with the best hacksaw or knife so that animals can’t get hurt with them. Check out the Continental Elite line as well, which has a belt for everything, from generic serpentine belts to specific ones for air conditioning, power steering, etc. Be sure to also take a look at the Continental OE Technology Series Poly-V Belt, which uses quiet channel technology for quiet yet efficient performance. It is also more wear resistant due to the high-strength tension. Do you want to control the sway of your trailer or manage its stopping distance? Get the best trailer brake controller.

Our #3 Pick is the Bando 4PK960 Serpentine Belt
Check Price

WHY WE LIKE IT: The four-ribbed Bando 4PK960 is also a proud member of the company’s Rib Ace line. You’ll need this equally superb EPDM serpentine belt if you’re the owner of any of the Honda, Mazda, Mitsubishi, Subaru, and Hummer vehicles, and more listed below.

The three-inch-wide Bando 4PK960 is just as thick as the first two Bando belts mentioned but is the shortest of the three, measuring 960 millimeters (37 inches) long.

Our #4 Pick is the ACDelco 6K930 Serpentine Belt
Check Price

WHY WE LIKE IT: This V-ribbed belt from ACDelco transmits power load efficiently and can keep your engine running safely despite misalignment. Its crack and high-temperature resistance prolongs its dependability aside from promoting noiseless operation.

The flexible six-ribbed, 2,363-millimeter (93-inch) ACDelco 6K930 allows the synchronized operations of your engine’s pulley-driven accessories and ensures it can withstand billions of topside and backside bends. No need to test that yourself by stretching it with the best bench vise.

Our #5 Pick is the Gates K060841Serpentine Belt
Check Price

WHY WE LIKE IT: Mercedes, Honda, and Acura vehicle owners will appreciate this precision-formed product, the quietest serpentine belt that is certified by the Society of Automotive Engineers (SAE). This Gates Micro-V belt is a combination of EPDM and Aramid fiber that’s also used in bullet-proof vests.

The six-ribbed product by the renowned maker of America’s best serpentine belts is made by form grinding—wherein a cylindrical grinder takes the shape of the end product—ensuring precise dimensional control. This optimum fit is also behind the belt’s quiet operation.

We chose serpentine belts made of EPDM as they offer better mileage than the older style neoprene belts. Vehicles made until the early 2000s used neoprene rubber belts that lasted only up to 60,000 miles or just half the capacity of EPDM products.

The brands we selected each made use of their unique technologies that promoted slip-free and flexible operations—regardless of width—making your engines work with virtually no noise.
Lastly, our shortlisted products aim to cater to a variety of car, SUV, and four-wheel utility drive models, not trucks for industrial use. Though we are part of the Amazon Services LLC Associates Program, we are committed to providing unbiased, honest feedback in these product reviews for our readers.

How do you know if your serpentine belt is going bad?

Even the best serpentine belt needs changing at least every seven years (or nine years at most depending on how worn out it is) or when you've run at least 60,000 miles with it (or 100,000 miles at most). Here are some signs that your serpentine belt has worn out and need replacement: 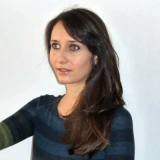 Geri Mileva
Based in Prague, CZ, Geri is a freelance writer with nine years of experience. Technology, marketing and finance are among her favorite topics to write about. She’s also a strong advocate of plant-based and ethical living.

How Long Does the Battery Last On An Electric Scooter