Manufactured with power users in mind, the Apple Smart Battery Case is one of the most innovative forms of technology, allowing the people of today to no longer be worried about the battery lifes on their Iphones. It basically acts as a case which packs in more battery cells, making it possible for your Apple Iphone XS Max or XR or whichever suitable model you have, to have a longer battery life, running through almost a day longer than it usually would. And so, coming from Apple with a silicon build, wireless charging capability and a lightning port , the Apple Smart Battery Case stands out to be one of the best Iphone battery cases out there. 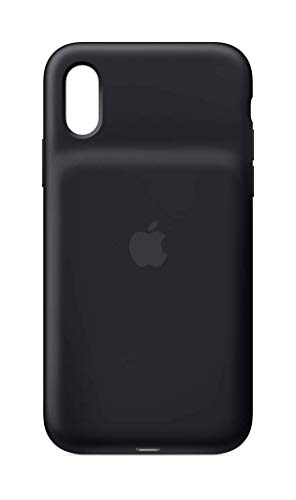 Making your need to plug in your Iphone almost unnecessary, the Apple Smart Battery Case allows you to get an extra pack of batteries included in the case and a wireless charging capability, removing the need for cables and power banks. With silicone cases for almost every other Iphone, the Apple Smart Battery Case is made extensively for power users who tend to spend a lot of time on their devices without a socket nearby. And if you happen to own a Samsung galaxy as well, one of these 8 waterproof cases to keep your Samsung Galaxy S4 safe around the pool may come in handy.

Packing in two 1430mAh battery cells, the Apple Smart Battery Case allows you to run your Iphone X with upto 22 hours of more internet use, 27 hours video playback and 39 hours of talk time. Considering the fact that the Iphone XR already has a pretty impressive battery life, it goes to show how this is not something everyone would require. Although those numbers are from Apples estimates, a more real world estimate would be around 55% to 75% more battery life overall. Apart from this, the Apple Smart Battery Case allows sound to easily be transferred to a headphone connected via a lightning connector and also shows how much juice you have left in the battery widget of the phone. On the other hand, devices like the Trianium Atomic Pro and the Swaller Iphone battery case are much cheaper but show the battery life via an LED light on the case. This is a great feature to have for those who are constantly on the go and can’t go past the lock screen everytime they want to check the case’s battery life, but apart from that it really isn’t much of a compromise.

Additionally, the new smart battery case also comes with a wireless charging capability which isn’t available in cases like the Smiphee iPhone Battery Case. This along with the lightning connected charging capability allows both your case and phone to be charged faster with ease.

All of these are great features for power users to have, that is if their only required device is an Iphone. Having a power bank may prove to be a better choice overall for most people, as although it comes with the hassle of a few cables, it means you can charge all your devices via the same bank easily. Whereas, while the Apple Smart Battery Case is great, it is only good for Iphones. And if you’ve always wanted to own a 360 camera but can’t afford it, take a good look at how the VRkit turns your smartphone into a 360 camera, and it’s affordable.

Coming at a variety of sizes and colours from the apple store, each Smart battery case fits their respective device like a charm. The Iphone XS Smart battery case and all the others have a hump starting at the top of the case. It does necessarily thicken the entire device and makes it heavier as well, but for those who can get past that, the rest of the design is pretty sleek and is available for devices ranging from the Pro Max to the XR in a range of prints from the color black to pink sand as well as white. If you do require a case with a straight back, the Swaller Iphone Battery Case is definitely worth checking out.
As for the building material of the case, it’s built of silicone which although causes fingerprints to be picked up, is pretty solid and flexible.

While there are many different options out there with larger battery sizes, there is only one that mixes so well with the IOS interface. And so coming from Apple as well, the Apple Smart Battery Case comes with a battery life display in the battery widget, a lighting connector which charges up the device faster, and is pretty much one of the only smart battery cases that support wireless charging. And so paired with all that, the Apple Smart Battery Case is worth its price at $65, but that is if you only consider how other battery cases price.

Overall, the case most definitely offers pretty much almost everything a battery case needs. It provides a good enough battery life, great blending with the interface of the Iphone, lightning connectors as well a wireless charging capability and white black and pink sand colors. The only things that may seem to be out of place here is the hump at the back and the price. To pay so much for a case is a long shot. But then again, for those who need long hours and find connecting cables to a powerbank at all a hassle, the Apple Smart Battery Case is worth checking out, that is if you’re willing to pay the premium price.