Acer Nitro 5 Spin Gaming Laptops are among the best 2 in 1 gaming laptops thanks to their stellar battery life, great display, and comfortable keyboard. For work or for gaming a great keyboard is always essential. There are some takeaways from committed gaming laptops though, such as an incredible rise in heat when gaming. While a 2-in-1 gaming laptop isn’t a common occurrence, the Acer Nitro 5 is still one of the best gaming laptops of its kind on the market. 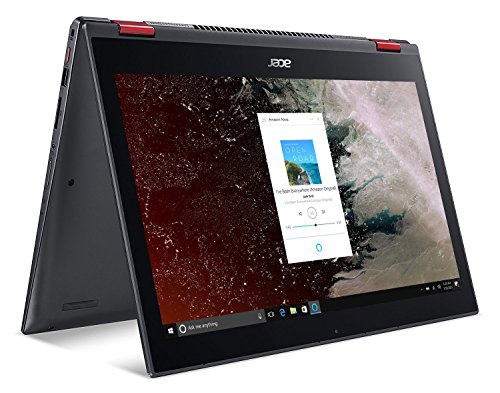 The Acer Nitro 5 Spin is a somewhat entry-level, gaming friendly laptop that can play games smoothly and comfortably thanks to the GPU. With an advanced CPU and RAM, the laptop can also handle a fair-share of multitasking if you want to watch some quick YouTube videos in-between bouts of work.

The Acer Nitro 5 Spin sports an 8th Gen Intel Core i7 CPU, 8GB of RAM, and a Nvidia GeForce GTX 1050 GPU. If you’re not going to be using it for much gaming and don’t need a processor with this much power, check out the Microsoft Surface Book Gaming which has an Intel Core i5 option. But the Acer Nitro 5 Spin can handle a fair-share of multitasking, and gaming performance is relatively good so long as graphically-intense games aren’t played on the highest setting.

Related: For a great laptop for MMORPG, check out our Acer Nitro 5 i5 9300H review.

Gaming laptops have always had a reputation for poor battery life. However, the Acer Nitro 5 Spin shatters that stereotype with its impressive seven hours and eight minutes of battery life. It’s probably because the laptop is made for more than just gaming and so battery life becomes essential. You can also check out the Microsoft Surface Book 2 Gaming for another example of a laptop with great battery life.

On the right side of the laptop you’ll find a USB 2.0 port, an SD card reader, a headset jack, a secure lock slot, the power button, and volume buttons. The left side has two USB 3.0 ports, a USB Type-C port, full HDMI port, and a DC jack. Unfortunately, there is no Ethernet port, but there’s still a lot more ports on this then there is on the Asus Zenbook Gaming.

See also: If you’re looking for a more high-end gaming laptop, then take a look at our Acer Predator 17 Gaming Laptop review.

The beautiful red accents, such as on the hinges and on the bezels, take what would be a standard-issue laptop and turn it into something more refined and interesting. The 1080P full HD display produces rich hues and finely detailed, sharp images. The top-mounted speakers deliver a good amount of sound and the subwoofer belts out a respectable amount of bass even if just slightly distorted as max volume.

While not a completely committed gaming or work laptop, the Acer Nitro 5 Spin can still perform both jobs competently. The lack of an Ethernet port is a letdown, considering the price, but at least they do include an ExoAmp antenna for a more secure wireless connection. So if you’re a casual gamer that wants something for work too, you’ll find a friend in the Acer Nitro 5 Spin.