For those constantly battling pollutants, wouldn’t you want the best backpack vacuum cleaner to specifically target them? The HEPA Vacuum Cleaner is at your service. With its suction power and efficient sealing system, you can confidently suck up particles as small as 0.3 microns and make sure they stay captured. 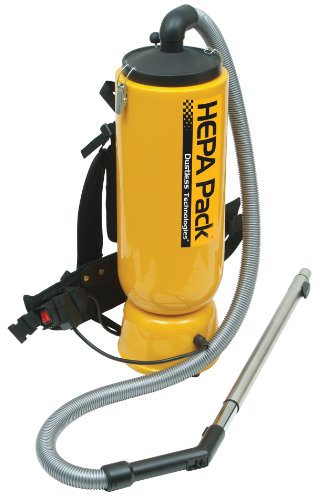 With 180 CFM and efficient HEPA filtration system, the HEPA Vacuum Cleaner captures particles as small as 0.3 microns and keeps them captured inside a 2.5-gallon bin.

Judging by its suction power of 180 CFM, yanking pet hair from tightly wound carpet isn’t an issue to the HEPA Vacuums. This is made all the more apparent, considering it can suck in and capture particles as small as 0.3 microns.

Its suction power, in combination with its HEPA filtration system, also improves the efficiency of the HEPA Canister Vacuums. Since it’s so powerful, you’ll rarely go over the same spot more than once. In fact, it seals the contaminants in, preventing them from exiting the upright vacuum and back into the air.

Maintaining the HEPA Vacuum Cleaner is fairly simple: you dispose of the bags. What will require a small amount of work are the HEPA filters; they’re reusable and just require a cleaning every so often to keep at peak performance. As for capacity, the vacuum bags are 2.5-gallon containers, which is one gallon more than the Koblenz Vacuum BP-1400.

Even the best HEPA vacuum cleaners have some plastic components, and this one isn’t any different. However, that’s only for a few attachments. As for the vacuum itself, it’s primarily a metal composition, which really ups its sturdiness. This does come at the cost of being heavier; it’s 23.3 lbs, so a 5-point harness system was added to help handle it. The Hoover Commercial C2401 is only 10 lbs.

If you’re constantly plagued by pollutants in your workspace or even at home, the HEPA Vacuum Cleaner can already provide an invaluable service. It’s built to snag those pollutants and, in turn, create a much friendlier and fresher environment than it was before. But remember this: it uses vacuum bags, so if cost effectiveness is what you’re after, then the ProTeam ProVac FS6 is available.

The HEPA Vacuum Cleaner has very few flaws. It’s heavy (23.3 lbs), but its 5-point harness system largely circumvents that. And with vacuum bags, the plus here is that pollutants stay in the bag, rather than get sucked out another end. After all, it can capture particles as small as 0.3 microns. Its cloth filter is also reusable.