If you’re ready to settle down with the best archery target, something a bit smaller and focused, cricket can be a lot of fun. It’s even better with friends! And since the Fat Cat Electronic Dart Board Multiplayer can support 4 players with six darts, it fits perfectly within a game room. And if you like hunting, read our post on the best hunting and shooting equipment. 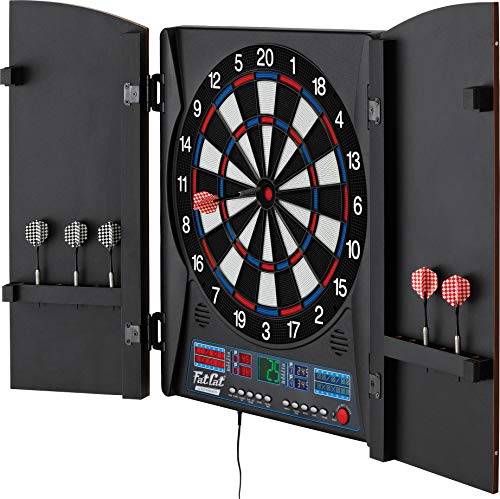 Related: Check out other dartboards in our Dmi Sports Dartboard Electronic Scoreboard review

Why We Like It – Fat Cat Electronic Dart Board Multiplayer

For fun with friends and family, this dartboard houses all the necessary equipment such as six soft tip darts, dozens of games, and keeps score on up to 4 players.

The issue is primarily the material used: thermoplastic. It’s durable all right, but plastic isn’t self-healing. The target face will eventually take a beating to the point where you won’t be able to play right. It isn’t all bad, though. The darts are regulation size and will weigh nicely in the hands. The cabinet itself can be concealed with two doors which also double as dart storage for up to 12 darts. The Delta McKenzie Speed Bag Archery Target appears to be of slightly better quality overall.

Bundled inside the board are 38 dart games with 167 scoring options. On the surface, that sounds like a lot, and it is—it’s more than the Morrell Double 450fps Archery Target can say. However, many of those dart games are nothing more than a few changes in the rule, then labeled as a “new game.” You also get six soft tip darts with replacement tips, so you’ll never need to think about new darts for a while. Unfortunately, the fact that it’s made of plastic, and not self-healing, really puts a short timer on its lifespan. Are you willing to pay $92 once in a while to replace it?

The Fat Cat Electronic Dart Board Multiplayer Set is a hard sell. Its biggest crutch is the plastic material it was made on with pre-drilled holes. Cricket is already tough, so having premade holes makes it even more difficult. For fun with friends in a game room, you could get some enjoyment; it’s 4-player friendly with dozens of games.