Some outdoor activities rely on counting weight, even down to the grams—but there’s no way you’re going out without a way to cook good food. You’ll need something incredibly lightweight but can still get the job done, like boiling water and cooking food. The best backpacking stove might be a BRS 3000T Ultralight Stove. 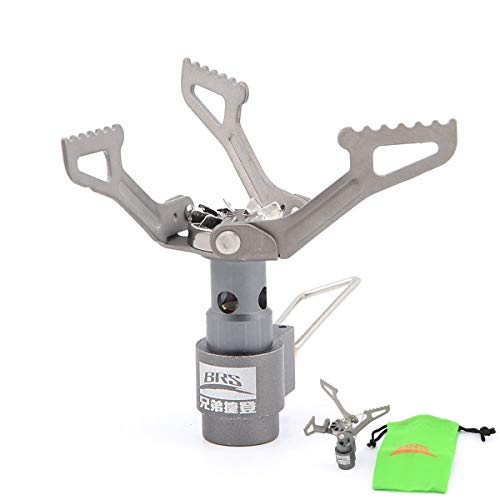 If you’re heading into the wild, you understand how weight can severely hinder your experience. This backpacking stove understands that with its incredibly low weight of 25g, and still does its job.

The BRS 3000T was pretty underwhelming in terms of performance. Boiling a single liter of water took anywhere between 2.5 to 3 minutes. That isn’t very efficient, especially for butane fuel. Still, that’s a minute faster than the 4 minutes it takes for the Coleman Camping Sportster Backpacking Stove to boil the same amount. And you can chip away at the inefficiency by using the fire control valve, but not enough to feel a huge difference. However, when you do boil water, your biggest issue: wind. It’s so lightweight and tiny that it becomes unstable.

What the BRS 3000T Ultralight Canister Stove does best, above all else, is being a lightweight gas stove. And we really mean “lightweight.” Compared to other gas canister stoves, the BRS 3000T is 25 grams (0.88 oz), which is impressive for being made of titanium alloy. To put that in perspective: the Ohuhu Camping Stove is 14.2 oz. You would need 14 BRS 3000T Stoves to match that weight. Depending on the activity, this can make or break your decision.

As far as value goes, the BRS 3000T Ultralight Stove makes up for its underwhelming performance by being very cheap. It certainly performs like a $17 camping stove. So, if you’re pressed for cash or need a ultra light little stove during a trip where every gram counts, then this BRS Stove may hold some value to you.

If we look at value as a spectrum, the BRS 3000T Ultralight Stove hugs the border of being good for its price. It suffers from balance issues and lack of protection against the wind—both of which can be solved through a stand and windshield. It then becomes clear this ultralight backpacking stove has decent 3-arm pot support for a cheap price.