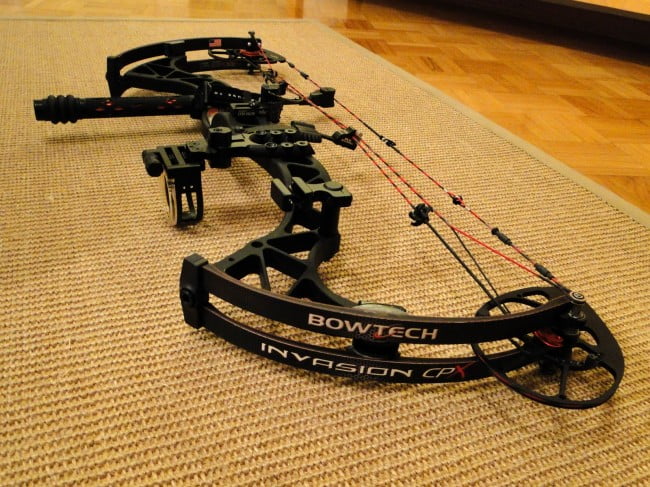 With all of the fervor on CES right now, I wanted to bring out something for those of us with a more “outdoor” focus on things.  Since the archery seasons are winding down (at least in the states around me), many hunters are going to be thinking about how to upgrade their equipment to bag the big one next year. Get your best earthquake kit ready for hunting season, and read on to find out how to finally make the kill. I have a number of different bows, sights, and other miscellaneous gear that I’ll be reviewing in the coming weeks, but I thought it best to start off with a bang. If you want a way to charge your phone on your next camping trip take a look at the Blue Freedom, which is a handheld power plant. Now this is a 2011 model that I had to review, so while you may be able to pick this one up for a good bargain right now, you’ll have to wait a bit longer for a 2012 model review. If this crossbow isn’t enough for your survival needs, you should also read our review of the FireKnife survival knife. This bow is a must for the best survival gear setup. 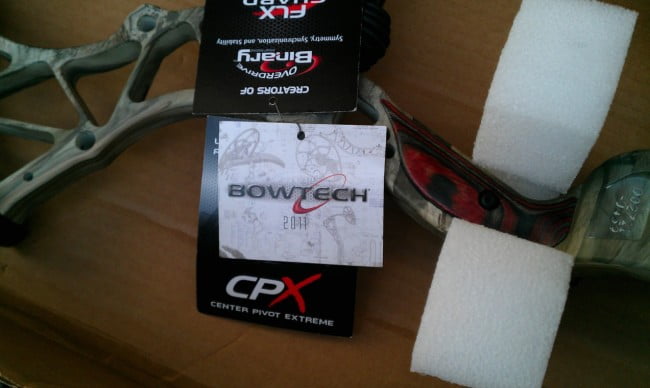 I remember reading all of the hype surrounding this bow before it was released, but I never was able to just go and pick one up on my own (yes, my wife would have killed me for spending so much on a new bow when my old one was “perfectly fine” in her eyes).  While at the time I wasn’t sure that the hype was warranted – call me skeptical, but I’ve been around – however after having it in my hands and being able to take it out I have to say I was pleasantly wrong.  The BowTech CPX Invasion was quite simply one of the best bows that I’ve used in a long time. If you’re looking for something for disaster preparation, the SOS in a Box, is a handy solar powered backup generator system. 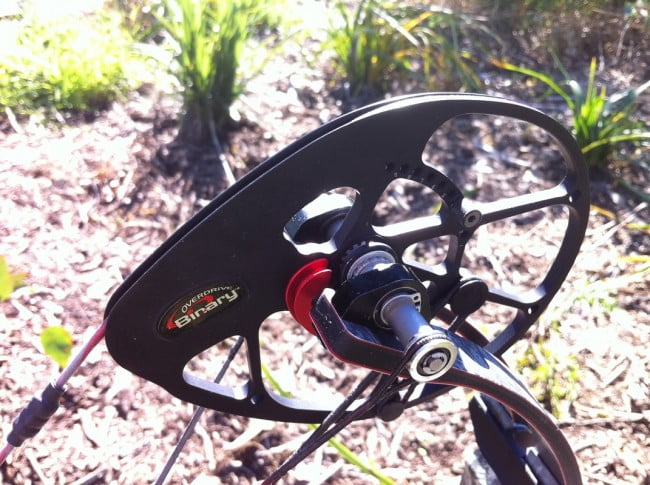 The design is the first thing that caught my eye; the Invasion uses a “center pivot” design, but then ramps it up by using a special riser to make sure that the pivot point is directly in the center of the limb.  Of course with a new and improved system, comes a new name; no longer just the “center pivot”, the new system is the “Center Pivot Extreme” – or the CPX you see in the name.  This CPX system is able to give the BowTech Invasion a claimed FPS of 343 (I say claimed, because in my tests it fired at 339 FPS, but my weight may have been a tad lower than what they test it at).  While an FPS of 343 might not be the absolute fastest out there, you had better believe that it is still ridiculously fast (especially when coming from a bow that shot under 250 FPS normally). 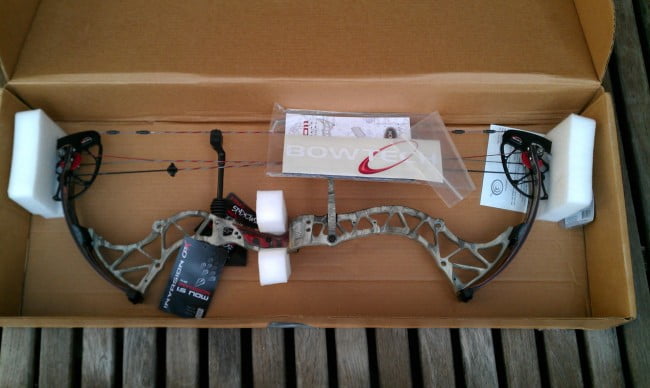 Another really nice little thing in the design is the inclusion of a two piece wooden grip – this has a much better feel than the plastic one piece deal that they had used in earlier models, and really just makes the bow feel “right” when it is in your hands.  The Invasion also incorporates a flexible cable guard (called a FLX Guard), and a carbon rod string stop, which really helps in keeping the weight down on the bow.  As it stands, the BowTech Invasion only comes in at 3.9 pounds (plus your quiver of course), so it’s not heavy in the least bit; it’s no issue at all to carry it to where you’re firing at. 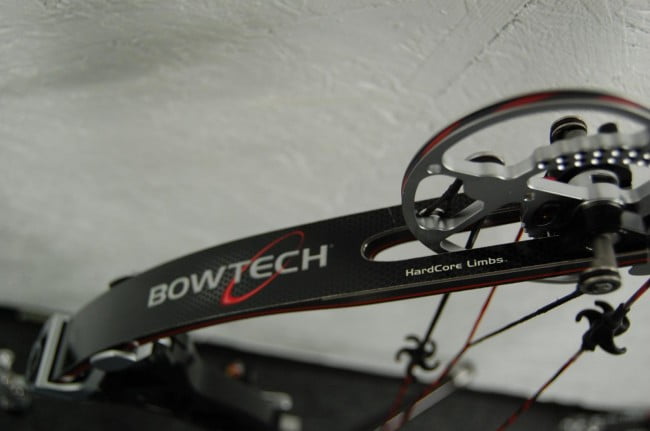 The limbs of the BowTech Invasion are called “HardCore”, and believe me – they are.  BowTech has some crazy engineering program that is able to design these limbs to be next to perfect.  Seven layers, double tapered (in order to work better with the CPX system), and a solid carbon core are the primary features that make these limbs so bad ass.  In your average bow, the majority of energy is stored along the outside of a limb, however with the “HardCore” design, the BowTech Invasion uses that solid core to store energy through the entire limb.  It’s hard to accurately describe all of that without telling you to just go and shoot one.  Quite honestly, the pull back and release both just feel so “different” from your average bow because of it. 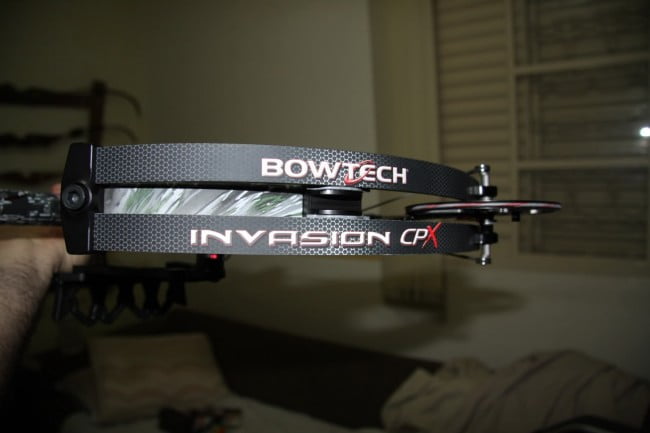 One thing to watch out for because of this design however, is just how easy it is to let the bow get away from you.  Let me explain here – when I first got it, I drew the Invasion back just to get a feel for it.  It drew back like normal, but when I went to ease the string back so as not to dry fire, as soon as I hit that break point I literally had to use all of my strength to stop it from taking off.  I actually wrenched my shoulder from the experience.  I had drawn bows back and eased them back to a resting position before without any issues, but just to be sure I had another friend of mine who hunts much more than I do try it out.  I gave him no warning, and watched as he did the exact thing that I did – coming extremely close to dry firing because we just were not ready for how responsive these limbs actually are. 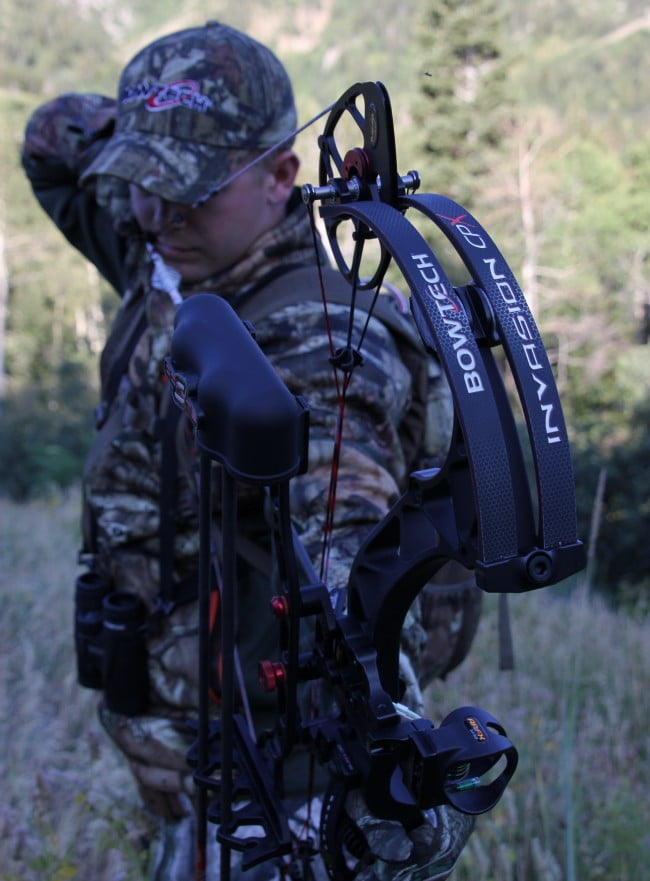 I’ve shot bows faster, and I’ve shot bows bigger – none compare to the experience that I had with the Invasion.  While I didn’t bring anything down with the Invasion this year (as I got it mere weeks before the season started), I spent as much time as I could getting it sighted in and adjusting to the way it fires.  For fifteen years, I fingered my bow strings – but I hadn’t shot anything like this before.  After trying for an afternoon, I decided I had to take the plunge and get a release, or I was going to end up hurting myself on this beast.  Fortunately, the Invasion had a loop on the string already, so I didn’t need to go and get that dropped on to it.  While going with a release wasn’t my initial choice, I don’t think I’ll ever go back now just because of this bow.

The Bottom Line:  This is definitely a Championship level bow, and has the speed and power to put a lot of others to shame, just watch out for the kick when those “HardCore” limbs show how they got the name.

Most dealers that I checked with sell the BowTech CPX Invasion for between $850 and $899, but your mileage may vary. 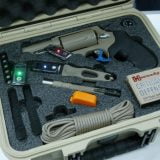 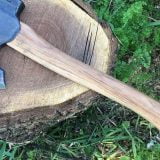 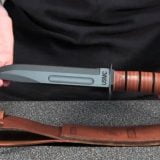 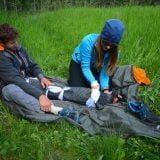 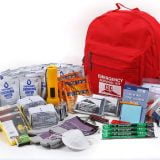 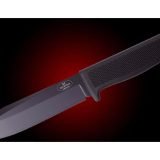