The Acer Chromebook Spin 15 CP315 is a lower mid-range chromebook with a decent screen and mediocre specs. It’s in many ways the perfect chromebook design; it’s hyper-tuned for web browsing and media consumption, packing features aimed more towards a casual crowd than a techie one. Its low price, decent screen, and passable performance make it one of the best chromebooks for seniors. 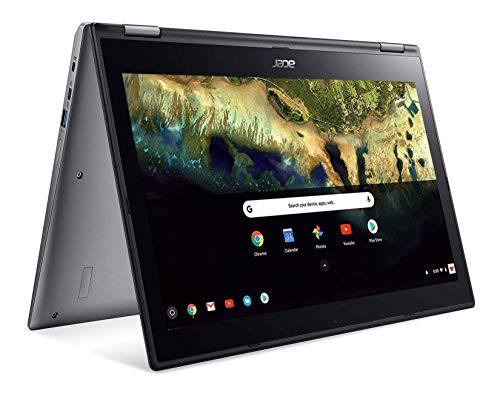 There are both upsides and downsides to the Acer Chromebook Spin 15 CP315’s display. It’s IPS, which means viewing angles and overall colors are solid, and it’s 1080p, meaning it’s crisp and can fit denser UI elements on screen. It has a touch screen, allowing the chromebook to be used in tablet mode, and it’s decently bright, which makes it stand out against even much pricier models like the HP Chromebook x360 14. With that said though, its color reproduction is just adequate; it only produces around 68% of the sRGB spectrum, meaning it appears somewhat dull. For $400, though, there’s little to complain about. If you prefer something more vibrant with amazing touch display, have a look at our Acer Chromebook Spin 13 Review.

Thanks to its decently sized 3-cell 4670 mAh battery and very low power processor, battery life is quite solid. At low brightnesses, it can last over 9 hours on a single charge, making it adequate for long work periods or casual browsing sessions over longer stretches of time. It outlives the Asus Chromebook C523NA, making it a better pick if battery is your utmost priority.

Weighing in at 4.6 pounds, the Acer Chromebook Spin 15 CP315 is a very dense machine for its performance class. The Acer Chromebook 514 is over 1 pound lighter while packing the same hardware (or better, in some cases), making the Spin seem dated and clunky in comparison. 4.7 lbs. isn’t terrible at all for a 15.6” machine, but it would have been nice to see something lighter, particularly with such meager hardware; there are high end gaming laptops packing top-of-the-line hardware that weigh less than this does.

Durability is fine on the Acer Chromebook Spin 15 CP315; it’s made of dense plastic that’s textured in a way to make carrying it around easier. It employs a double hinge design that should hold up over time, and overall build quality is adequate for the price; aluminum would have been nice to see, but it’s hard to complain much for $400.

Port selection is fairly typical of a non-budget chromebook. It’s rocking 2 USB Type C ports, 2 USB Type A ports, a headphone jack, and a microSD card slot. You’ll need that SD card slot in particular thanks to its paltry 32 GB of internal storage; while it’s fine for browsing the web, more would have been nice to see, especially at such a high price point. Its keyboard is nothing to write home about, with very short travel and an overall just adequate feel; it’s not the best, but it’s definitely far from the worst, too.

The Acer Chromebook Spin 15 CP315 is a weird machine. Like many chromebooks, it has a very weird spec sheet that leaves users wanting just a little bit more from it; 32 GB of storage is paltry for all but the absolute lightest use cases, while 4 GB of RAM is a bit tight for any kind of multitasking (not that Chrome OS is great at that). If you’re just looking for a machine to use Google Chrome and some basic apps on, it’s a very good pick, but users that want or need more power, a better display, or a more compact package should look elsewhere.