OKCOO is not really a well-known brand when it comes to projectors. But their OKCOO Native 1080P Video Projector performs impressively for how little it costs. The fact that it makes our best business projector list itself should automate this projector high up on your shortlist for your next projector. 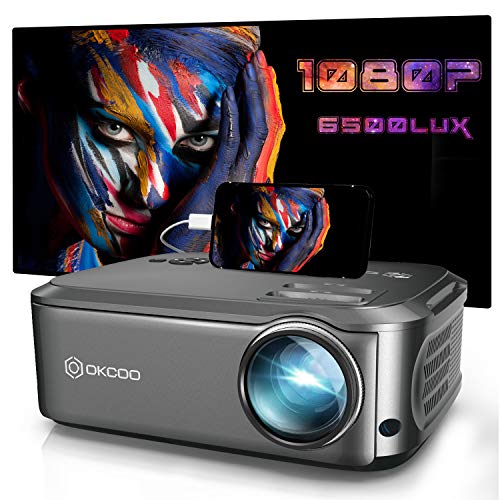 Why We Like It – Projector, OKCOO Native 1080P Video Projector

There’s no doubt that the OKCOO Native 1080P Video Projector is a simple, straightforward, cheap movie projector with a few features to boot. But don’t let that fact deter you from buying it. It provides pretty amazing picture quality for its price, and other factors (excluding the sound department) are pretty great as well.

On this video projector, OKCOO touts 1080p native resolution. But getting the full HD projection to work is a pain in itself. As expected, it only supports full HD native resolution through its HDMI port. And OKCOO also touts Desktop, Laptop, iOS/Android, Fire TV Stick, PS4, and XBOX support on this full HD outdoor movie projector. However, if you connect your phone through the HDMI port (your phone has to support video output through the micro USB/type c port, MHL support mandatory), you don’t get 1080p output.

If you don’t want to deal with all these complications, go for the Epson EX7240. If you want a projector with an HDMI 1.4a port for better compatibility with modern devices and can support higher resolution signal input too and can downscale them to match the resolution, try the Optoma S334e SVGA Bright Professional Projector Lights On Viewing projector or the Optoma HD29Darbee 1080p projector.

For a projector that costs just over $200, 6500 lumens is an unbelievable number to advertise. It’s definitely better than the Vamvo L4200 video projector since it only has 3800-lumens. But that is in lux lumen units. Lux (standard lumen) is different from ANSI lumen. Most trusted brands use ANSI lumens when advertising brightness. ANSI lumens units are a much better representation measurement for brightness. So, in reality, the brightness of this lamp is more akin to something around 4500 lumens.

The OKCOO Native 1080P Video Projector comes with all the standard adjustment features you might expect from a cheaper full HD outdoor movie projector. It even has a ceiling mount. And the +/- 15 keystone correction function, the zooming lens are all the standard stuff you normally get to see. This setup would be perfect to use with the Screen Innovations 5 series motorized 115 projector screen.

On this projector, OKCOO advertises 78000 hours of lamp lifespan. Now, that probably isn’t true, but it does come pretty close. And the fan inside does a pretty good job of cooling the lamp without ramping up too high and becoming noisy and annoying. But if you are still skeptical about it, the BenQ MH760 1080P Business Projector also comes with a great lamp lifespan.

If you want a somewhat usable HDMI VGA video projector from Amazon.com, going cheaper than this projector is not really advisable. And you get free delivery with it, making it the most budget-friendly projector out there. But if you have a bit more money to spend, going with the Epson VS250 might be a better idea, as it is a more reputable brand.

The name “Projector, OKCOO Native 1080P Video Projector Full HD Outdoor Movie Projectors for Home Theater, Upgrade Business PowerPoint Presentations Projector for Laptop, iOS/android, Fire TV Stick, PS4” is a bit of a mouthful. But, with an almost 200” of projection size, it really is one of the best projectors you can find at this price and performs incredibly well. How to Make an Overhead Projector