It would be easier to review Ocean Kayak Scrambler 11’s value if they weren’t on backorder. But what we can say is that the Kayak can support whatever you want to throw at it. Except fishing, unfortunately. Check out our best kayak list for more on kayaks and so you can decide which kayak is right for you!

The Ocean Kayak Scrambler 11 houses an impressive amount of specs in a rather larger kayak. The large molded-in seat aids in maneuverability and comfort, and the larger than normal tank well means you can take even more of your favourite things, or even more essentials, out into the water with you.

The Ocean Scrambler Kayak 11 contains a large, molden-in seat well which aids in maneuverability by allowing you more space to paddle. The Kayak also contains an oversized tank well which allows you to store a lot of items and includes a bungee. There are no rod holders, though, so fishing will be very difficult with this kayak. Try the Sun Dolphin Excursion 10 Kayak if fishing is your niche and want to get as much fishing out of your kayak as possible.

The Ocean Kayak Scrambler 11 comes with a comfort seat plus which adds that much more comfort when you’re sitting in the kayak. The seat back is also replaceable with any seat Ocean Kayak has to offer with the exception of the Comfort Hybrid Seat. It also comes with a relatively spacious lock hatch which, unfortunately, doesn’t seem to be waterproof in the slightest. It’s a one seater kayak, so opt for the BKC TK219 Tandem Kayak if you want, or need, a two-person kayak.

The Ocean Kayak Scrambler 11’s comment section on the website includes posts and comments from two years ago. It’s a little worrying, personally, that they haven’t had a single comment since that time. It’s also impossible to tell you how much the kayak will cost as they are backordered until at least October. If you’re looking for an affordable Kayak right now to get the most out of what’s left out of summer, check out the Perception Sound 9.5 Kayak.

The Ocean Kayak Scrambler 11 has many great features going for it like a large tank well and comfortable and replaceable seat. It’s unfortunate that it’s difficult to support fishing and that the lock hatch isn’t waterproof (this seems like a no-brainer). And you won’t be able to get one until October. Well after summer is done and kayaking season is over. 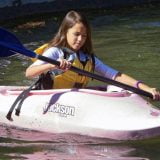 Best Kayak for Beginners in 2022 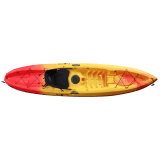 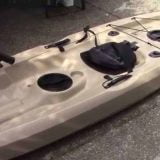 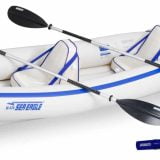 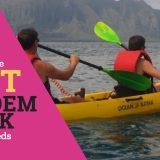 What is the Best Tandem Kayak? ~ Buyer’s Guide + Reviews 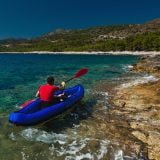 What is the Best Inflatable Kayak: Inflatable vs. Hardshell & Class IV Rapids