The whole idea behind a “sound table” is to provide convenient amplified sound from the television or any video device that is playing on it. But to integrate as the audio system of a home theater, this “sound table” needs to do more than just cram speakers and electronics into a shell. It looks like LG figured that out, because the  LAB540W 4.1 Ch 320W SoundPlate does have the capability of taking over for an audio receiver and speakers. So, this might be a great soundbar for LG TVs, after all.

Speaking of figured out, see what the best soundbar has to offer and what makes it our top choice.

The SoundPlate’s main chassis can hold an up-t0-55” TV, and add very little height overall. Connections are minimal: an HDMI input and output, an optical digital audio input, a USB input, and one for wired Ethernet. The optical can be used for audio from an attached device, such as the TV, providing it emits Dolby Digital as otherwise the SoundPlate’s internal decoders for it and DTS (plus high-resolution) are rendered useless.

Those worrying about there not being enough audio inputs to handle a cable box/satellite receiver or some other device needn’t be concerned, at least as far as connecting a video disc player goes. That’s because an LG Blu-ray player is already built-in. Looking at the front grill, this is betrayed by the thin slit, which readies the auto-feed mechanism when a disc is inserted.

LG also built in a full “Smart TV” system into the SoundPlate, so those who pined for the admittedly well-designed, useful, and usable LG “Smart TV’ technology now have access to it.

The “Smart TV” additions built in consist of access to all kinds of apps, including LG’s App Store and LG’s own user-generated content. Also, one can view videos, pics, and music from DLNA-connected devices, whether on the home network’s LAN (media server) or a paired Bluetooth device.

All of this worked efficiently, even though the SoundPlate was 30+ feet away from the wireless router supplying the WiFi signal. Android users (I not being one) can also connect their phone/tablet to the SoundPlate and play video, audio and pics using the MTP protocol.

The SoundPlate is set to auto-detect HDMI the first time it’s turned on, as a way to speed up the initial setup. But I was more impressed by how it could be set to come on whenever it detected an audio input. That, to me, was convenient.

The blue LED text display is hidden behind the front grill — making for a very cool-looking and easy-to-read display. The information it conveys is very similar to that of Blu-ray players: that is, if it has more to say than a few characters, it scrolls across. It’s a reasonable way to interact for basics like changing the input from HDMI to Bluetooth or for using it as a Blu-ray player, since it has the same feel as a Blu-ray player that way.

Most of the detailed interaction with the unit, however, is to be gleaned through the on-screen display as you go through the functions on the remote. Menus and settings are unremarkable, and there is no real learning curve to speak of.

Some of these “sound tables” rely on the bass being internal with the other speakers, which is unlike the Harman Kardon SB 16 2.1-channel active soundbar speaker system. This adds to the depth and size of the chassis, obviously, but also brings in the issues of vibration and interference.

The SoundPlate nixes that directly by including a downward-firing separate subwoofer, one that can be placed anywhere within a reasonable range since it functions wirelessly. The sub auto-connects and goes into standby when the SoundPlate is not in use. The remote is the simplest way to adjust the volume levels of the bass as well as the internal speakers — with OSD showing what is being done.

There’s no equalizer or treble/bass control, but you can play around with the volume of the subwoofer vs other speakers, which helps a little. Also, there are three overall EQ settings, Cinema, Standard, and Music, again accessible from the remote as all of the choices are. These settings tweak the sound to optimize it for the type of content, but it doesn’t show you on the OSD exactly what is being adjusted. Differences between them didn’t seem very dramatic to me, but YMMV.

There are 4 speakers inside the SoundPlate (hence it being a 4.1 audio system), with two facing front and one each at the sides (all at 40 watts ea.). The subwoofer’s rated at 160 watts. The speaker configuration doesn’t include a center channel, but there is enough separation for creating a decent stereo sound field.

I played several Blu-ray audio discs from tacet audio’s Real Surround Sound series (for example, Eric Wolfgang Korngold/String sextet D major op.10) and found the stereo separation surpassingly good. The quality of the performance overall was enjoyable, with no hiss or other interference in the softer passages. I had to say I preferred listening to this in stereo, as opposed to the default 5.1, since in stereo, I could drive the sound up higher with more confidence.

Continuing about the simulated surround, I had to admit I was a bit skeptical but used it to play several movies on the Blu-ray player. I watched scenes from Sabotage (Arnold Schwarzenegger) and did perceive surround sound-like effects coming from around me — this effect being emphasized or deadened by the amount of wall “bounce. Having a separate subwoofer for the bass meant that the low frequencies were well represented (as in having neighbors pound the walls if turned too high up late at night).

One gets used to having the deep bass a sub provides quickly, and its lack becomes something sorely missed when it is not there. For a more “talk” like inspection, I played episodes from Community: The First Season and had no difficulty in understanding whatever the actors were saying. Also, the timbre of the voices, male and female, came off sounding natural, even when I drove the volume up.

Overall the sound coming from the SoundPlate was quite clear, with nothing seeming to be hiding down in the weeds. The only variability was from channel to channel when watching television, as some channels were quite a bit louder than others. However, this could be corrected by setting the auto-volume, which makes all volumes a constant level. Also, DRC setting limits bursts of loud dialog, like during some commercials.

Bottom line: LG’s LAB540W 4.1 Ch 320W SoundPlate ($599.99 retail) is solidly built and further emphasizes the sleek and sexy look of today’s flat-panel TVs. It is a serious contender for anyone looking to upgrade their viewing experience into a more “home theater” environment. 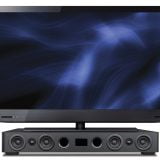 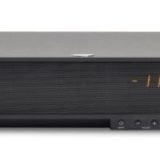 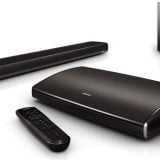 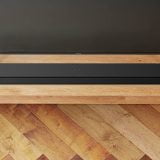 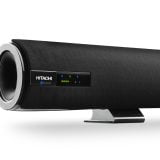 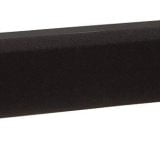